To All The Boys- Always And Forever Movie Review: Lara Jean And Peter Kravinsky's Romance Goes Back Being Adorable In This Fitting Finale (LatestLY Exclusive)

To All The Boys: Always And Forever is streaming on Netflix as the streamer's Valentine's Day servings for the romantics. The third and final movie in the series reverts to the endearing romance that it was in the first film after a haywire second installment. 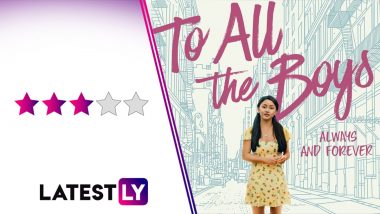 To All The Boys: Always And Forever ratings

To All The Boys: Always And Forever movie review: When one has a pretty diluted and unhappy experience of a second film, one treads the path towards watching the third film in the Lara Jean-Peter Kravinsky romance very cautiously. Fortunately for me, except for a few bumps, the ride is rather fulfilling. In fact, if I dare say so, the third film makes you wonder if To All The Boys: P.S. I Still Love You was just an aberration. To All The Boys: P S I Still Love You Stars Lana Condor and Noah Centineo Have a Hilarious Reaction to Shah Rukh Khan’s Signature ‘Open Arms Pose’ (Watch Video)

Lara Jean (Lana Candor) and Peter Kravinsky (Noah Centineo) are still going strong and are on the cusp of making some very important decisions that could alter their relationship. Example? College! Peter has already been accepted to Stanford University while LJ hopes she does too while on a Seoul-full tour to South Korea. But she doesn't and instead gets a Berkley acceptance letter. Peter and LJ still manage to look for a way to get a new plan in place and then NYU strikes. That's when the inevitable happens.

The third and final film in the To All The Boys series by Jenny Han goes back to being endearing and cute like the first movie which is such a relief. Those were sourly missed in the second installment. The latter was all over the place as it tried to show LJ's concerns about dating a popular guy or how to date him for that matter. In comes, a distraction and she almost strays.  Thankfully, the third one doesn't meander pointlessly.

LJ and Peter's chemistry is effortless and sweet. Here, they even grow up to being charming and accepting towards each other. Like the scene where LJ tries to sex her way out of feeling insecure about her relationship with Peter and he stops her.  Mature relationships do look like that.

All the recurring characters are back and so is the adorable yet wicked Katty, played by Anna Cathcart. She has always been shown as a quick-witted kid who sometimes takes better decision than Lara Jean. Here, she decides to not be in a long-distance relationship with her Korean boyfriend Dae because he called Harry Potter books dumb. I so feel you, Kathy, I would dump him too even when he is an Oppa! (Shout-out to all K-drama crazies). These moments are in plenty which makes the third film an appealing watch.

It does have its fair share of minuses albeit lesser. Lara accidentally misinforms Peter that she has been accepted at Stanford and takes her own sweet time to come clean. Absolutely unnecessary! The conflict brews for such a long time that when finally it bursts open, you aren't interested in the repercussions. The sudden addition of Peter's father in the milieu doesn't really add anything to the story. Even without it, the film would have looked the same. The Seoul tour was too short with regular K-drama tropes being used in it. Perhaps stretching it for a couple of more scenes would have made the whole purpose of it a lot more evident. By the way, the purpose was LJ is finding her roots there as her mom was Korean. Plus the whole choosing a college premise weirdly reminded me of Kissing Booth 2 where the female protagonist does face a similar dilemma. In fact, the third film in that series would take that thought forward. The Kissing Booth 2 Movie Review: Joey King's Elle Finally Gets The Character Arc She Deserves In This Sluggish, But Entertaining Sequel

Check out the trailer of To All The Boys: Always And Forever here.

Lana Candor and Noah Centineo as an onscreen couple are extremely eye-pleasing and effortless. Since the first film, there have been no slip-ups. Their kisses still melt your heart. Individually, Lana is lovable and cute but that has been the case since the first movie. Not much arc there and the same goes for Noah. Barring Anna who continues to be rightfully sassy in her character and does it amazingly well, everyone else doesn't have much to contribute here.

-Conflict takes time too much time to  reach a crescendo

-Characters don't have much arc

To All The Boys I Have Loved Before series comes to its culmination with Always and Forever. There couldn't have been a better finale. Despite a few occasional and perhaps dismissable hiccups (with romantic comedies, one tends to overlook them), this is a movie for every single or attached people this Valentine's Day. To All The Boys: Always And Forever is streaming on Netflix.

(The above story first appeared on LatestLY on Feb 13, 2021 11:26 PM IST. For more news and updates on politics, world, sports, entertainment and lifestyle, log on to our website latestly.com).