Rajkummar Rao, Prakash Raj and Rishab Shetty have given voiceovers in different languages for the premiere of the documentary "Wild Karnataka" on June 5, which happens to be World Environment Day. The renowned English broadcaster and natural historian, Sir David Attenborough, narrates the English version while Rajkummar has voiced the Hindi version. 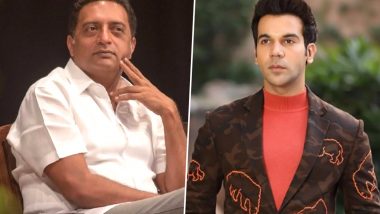 Rajkummar Rao, Prakash Raj and Rishab Shetty have given voiceovers in different languages for the premiere of the documentary "Wild Karnataka" on June 5, which happens to be World Environment Day. The renowned English broadcaster and natural historian, Sir David Attenborough, narrates the English version while Rajkummar has voiced the Hindi version, with Prakash Raj doing the job for the Telugu and Tamil versions, and Rishab Shetty in Kannada. Sachin: A Billion Dreams Completes Three Years, Fans Rejoice ‘Sachin Tendulkar Documentary’ on Twitter.

Rajkummar said: "As an actor you're always looking for interesting stories to tell. However, to be able to narrate the story of our country's wildlife was an extremely enriching experience for me. 'Wild Karnataka' celebrates the spectacular diversity of the Indian state, Karnataka, and brings us closer to the wildlife that thrives in the state. It serves as a good reminder for all of us to truly celebrate our country's rich natural treasures and work towards preserving them for generations to come." Twinkle Khanna Remembers Late Father and Superstar Rajesh Khanna, Shares His Documentary From The Sets of Aap Ki Kasam (Watch Video)

Prakash Raj connects with the project's ethos -- celebrating the rich bio-diversity that is prevalent in India. "The magnitude of this wild based magnum opus can be gauged from the fact that this hour-long documentary is sieved from four hundred hours of shot footage. To use one's craft for raising awareness about the beauty and the diversity of our natural heritage is a beautiful thing and now it is up to us, the viewers and the citizens of India to not only celebrate this beauty but also work towards taking care of it," he said.

Rishab Shetty, who has dubbed for the film in Kannada, said "Wild Karnataka" is close to his heart as he is from Karnataka. "Lending my voice to the film in a way helps bring it closer to the people of Karnataka so they can witness the beautiful wildlife that thrives in this state, with a personal touch. It is extremely important for us to save our wildlife and the government and Forest Department of Karnataka are taking great efforts despite the pressures of development and vast human populations.

It is time we learn more about this and understand how we can be a part of the solution," he said. Produced by filmmakers Amoghavarsha JS and Kalyan Varma in collaboration with Karnataka Forest Department, "Wild Karnataka" focuses on the biodiversity that flourishes in the wild. The film appreciates the efforts of the people, government and the Forest Department of Karnataka, who are committed towards saving some of the greatest natural history for the future generations.

Further, the movie spotlights the efforts of the government of Karnataka to save tigers and elephants. The money raised by this launch is being donated to the Tiger Foundation of Karnataka forest Department. It will premiere in India on June 5 on Discovery, Discovery HD, Animal Planet, DTamil and Discovery Plus App. "The premiere of 'Wild Karnataka' is part of our long-term vision of promoting and elevating Indian filmmakers and storytellers who are making exceptional content," said, Sai Abishek, Director, content, factual & lifestyle entertainment, South Asia, Discovery.

(The above story first appeared on LatestLY on May 26, 2020 07:29 PM IST. For more news and updates on politics, world, sports, entertainment and lifestyle, log on to our website latestly.com).