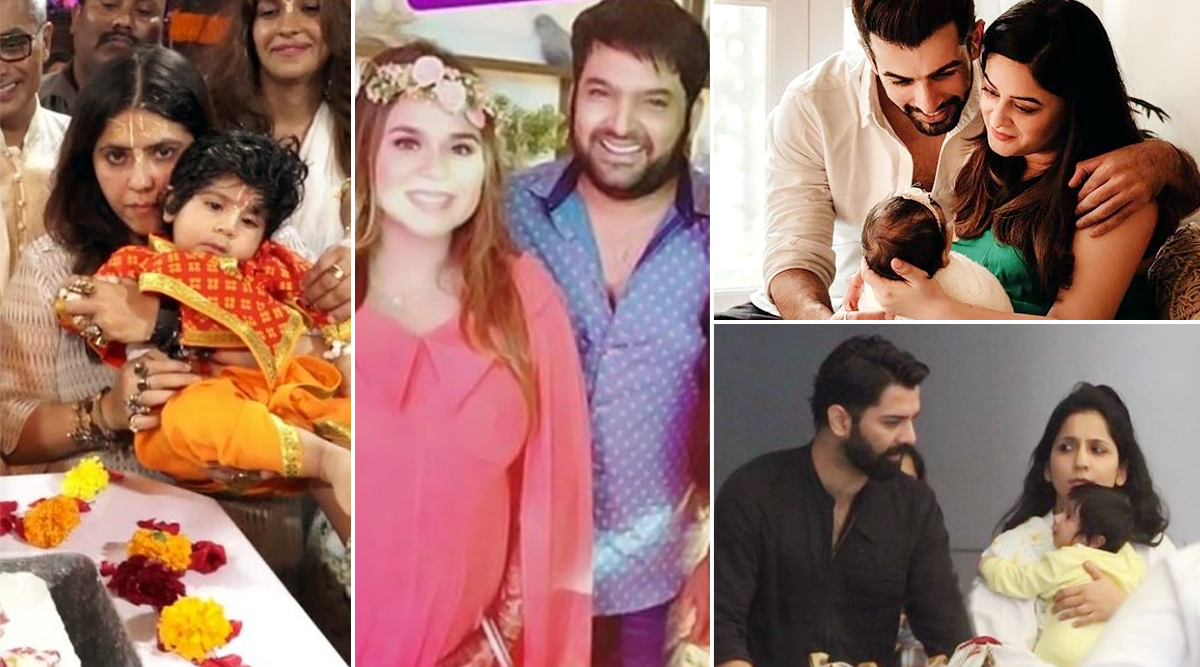 2019 sure has been a good year for the entire entertainment industry, at least in terms of work. While a lot of talent and content came forward this year and was accepted by the audience, it was a good year for a lot of industry people personally, for many of them welcomed new members into their families. While some happily shared the good news with everyone, others preferred to keep the news under the wraps. And just as 2019 is coming to an end, here's a list of babies that directly or indirectly joined the tinsel town. Ekta Kapoor's Son, Ravie Kapoor's Pictures Get LEAKED! Check out First Pictures of Her Adorable Munchkin.

The pair also revealed that they will share their baby Tara's first picture on December 25, 2019.

Barun Sobti and wife Pashmeen Manchanda welcomed their first baby girl on June 28, 2019 and have named her Sifat. Daddy's Little Girl! Barun Sobti Kissing His Baby Girl Sifat is the Cutest Thing You Will See on the Internet Today.

Announcing the arrival of baby boy Arham Hussein on 13th may. Thank you so much for all your wishes 🙏 I'm still in the hospital recovering, and will be sharing my birth story soon :) #babyboy ________________________ #chhavimittal #pregnancy #boy #son #motherhood #motherandson

Chhavi Mittal and Husband Mohit Hussein, who tied the knot in 2005, welcomed their first baby, a boy named Arham Hussein on May 13, 2019.

We have been blessed with a #Babyboy Mom and son both are healthy. 🤗🤗🤗🤗 @priyankavikaaskalantri 🙏🏻🙏🏻😇😇 a different feeling and so excited 😘😘

Here's One With The Baby:

One With The Baby:

Completeness!! ❤️ this one is especially for all my lovelies who wanted to see lil Kimaayra!! P.S Thank you for the beautiful striped dress @indu.karnani 💋She sends her coos and gurgles and doting dad and besotted mom can only smile with joy and pride!! Blessed by the best indeed! @jkarran 🥰💋💋

Navina Bole and Hubby Karan Jeet, who tied the knot in 2017 welcomed their baby girl on May 15 2019. They have named her Kimaayra. Ishqbaaaz Actress Navina Bole and Husband Karran Jeet Blessed With a Baby Girl!

Kayamath fame actress Panchi Bora married hubby Jaydeep in a hush-hush ceremony in 2017. She also managed to hide her second pregnancy the entire time and announced the arrival of her baby boy Ryaan on October 21, 2019.

❤️❤️Congratulations to my lovely student Sara who recently gave birth to her gorgeous twins Aizah & Zidane by planned caesarean birth. Her experience shows just how helpful pregnancy yoga and hypnobirthing can be regardless of what type of birth you have. ❤️❤️ “I wanted to acknowledge and thank you for your brilliant techniques I learnt in your pregnancy yoga which kept me and my twins calm and stress free throughout my third trimester and although I knew I was going to have a C-section, your hypno-yoga birth preparation class kept me really calm before and throughout my operation considering I’m a nervous wreck when it comes to surgeries. I could hear your voice echoing telling me to breath and relax my jaws.... thank you so much for helping me bring my bundle of joy stress free in this world! I think staying calm and stress free myself was the best gift I had given my twins during pregnancy. I’m now looking forward to your mummy and baby yoga class. “ Looking forward to seeing Sara in mummy and baby yoga soon, and yes it can be possible with twins! 👶🏻👶🏻😘

Our bundle of joy!

Home coming of my daughter Aayat,,,😍😍

Anas Rashid and Heena Iqbal who tied the knot in an arranged marriage set up in 2017, welcomed their firstborn, a baby girl named Aayat on February 12, 2019. Anas took to Instagram to announce the news to his fans and well-wishers. Diya Aur Baati Hum Fame Anas Rashid Blessed With a Baby Girl – Watch Video

Ekta Kapoor, in a first of its kind step, welcomed her baby boy Ravie Kapoor via surrogacy. Hugely inspired by brother Tusshar Kapoor who too has a boy via surrogacy, Ekta announced that her boy had arrived on January 27, 2019.