Meanwhile, Kush tries to attempt suicide and Goenka’s stand shocked. Luv tries to stop him but Kush refuses to listen to him. Kush gets an asthma attack. 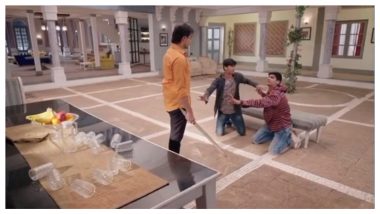 In yesterday’s episode of Yeh Rishta Kya Kehlata Hai, Luv and Kush’s plan to turn the tables on Naira backfires after Trisha recovers. The Geonka’s are shattered as Trisha reveals the name of her molesters. In tonight’s episode, we see furious Kartik (Mohsin Khan) looks for Luv and Kush. He sees them hiding under the table. He pulls them out and beats them. Luv and Kush apologize and Kartik beats them non-stop. Surekha comes and pleads Kartik not to beat them but Akhilesh stops her and tells Kartik is doing the right thing. The duos ask Naira (Shivangi Joshi) to save them but Naira says she is shocked and has never imagined that they are the real culprit. She says to Luv and Kush they belong to a reputed family but their act is shameful. Kartik drags them to the room and locks the duos. Goenka’s stands shocked. Yeh Rishta Kya Kehlata Hai February 12, 2020 Written Update Full Episode: Luv and Kush Fail to Prove Naira Wrong after Trisha Reveals They Were the Real Culprits.

Kartik gets disappointed and cries. Kartik and Naira dream young Luv and Kush and how good they used to be. Akhilesh on the other side blames himself for not able to give good upbringing to Luv and Kush. Manish tells him to calm down and tells that the whole family is to be blamed. Surekha pleads Suhasini and Suwarna to help Luv and Kush before anything wrong happens. Akhilesh tells not to support Luv and Kush and tells that they should get the punishment so that next time they don’t dare to do anything like this.

Meanwhile, Trisha cries and asks Naira and Kartik to punish Luv and Kush and do not spare them so that they can’t repeat this mistake ever. Her health worsens. Kartik and Naira ask Trisha to relax as they will not spare Luv and Kush. Kairav and Vansh says something has happened to Luv and Kush and they should help them. Yeh Rishta Kya Kehlata Hai February 11, 2020 Written Update Full Episode: Naira Reveals Luv and Kush’s Dirty Secret to Goenkas.

Luv gets furious and says why Trisha got saved. Kush tells Luv that no one can save them now. He gives an idea to Kush. Surekha cries and pleads in front of Suhasini to support Luv and Kush but Suhasini refuses to help her. Suhasini asks to think about what punishment they can give to the duos. She says at any cost this matter should not go out of the house. Naira interrupts and says they are no one to punish Luv and Kush as it is a molestation case and only the court will give the punishment to Luv and Kush.

Meanwhile, Kush tries to attempt suicide and Goenka’s stand shocked. Luv tries to stop him but Kush refuses to listen to him. Kush gets an asthma attack.

In the precap, the cops come to the Goenka house. Kartik is shocked and thinks Naira should have told him before calling the cops.

(The above story first appeared on LatestLY on Feb 13, 2020 07:24 PM IST. For more news and updates on politics, world, sports, entertainment and lifestyle, log on to our website latestly.com).