Yoo Ji-tae To Play Professor in Money Heist Korean - Joint Economic Area; Here's Why The Actor Is Apt For The Role

Netflix revealed the teaser of Money Heist: Korean - Joint Economic Area and introduced many key characters in the series along with Yoo Ji-tae as the Professor. The latter's selection as the mastermind didn't surprise us at all as he has played such a character before. Here're two such instances. 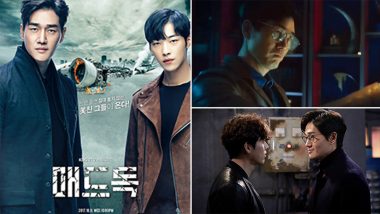 Netflix recently revealed the teaser of the Money Heist Korean remake titled Money Heist Korean - Joint Economic Area. It introduced all the key characters of the series namely Yoo Ji-tae as Professor, Jeon Joong as Tokyo, Park Hae-soo as Berlin, Lee Won-jong as Moscow, Kim Ji-hun as Denver, Jang Yoon-ju as Nairobi and more. Reports suggest the first season will be 12 episodes long instead of the original's 15 episodes. While it is expected to follow the same course of action, depending on the location and settings, a few plot points may change. From Money Heist to Lucifer - 5 Times Netflix Turned Saviour For Cancelled Shows!.

When Money Heist first premiered on TV in Spain, it got an underwhelming response. Hopefully, the Korean version will fare better. Now coming to the actors, we feel Yoo Ji-tae is the most obvious choice to play Professor, having already played a mastermind in couple of shows and movies.

Professor in Money Heist is the one who recruits eight people to steal €984 million from Royal Mint Of Spain. So essentially, Professor is a mastermind behind this entire heist. Yoo Ji-tae has played such characters in The Swindlers and Mad Dog. Although none of these has him robbing banks, Ji-tae does all the planning.

In The Swindlers, Ji-Tae plays a cop and leads an off-the-book team to bring the culprit behind a big scam to book. Hyung-bin, a scam-artist, realising the common goal joins his team. Ji-tae is the mind behind the entire operation. Even though Hyung-bin and Yoo Ji-tae don't really see eye to eye, he does follow Tae's lead at times. Guess he has the ability to make anyone follow his rules. From Goblin to Hometown Cha-Cha-Cha, 7 K-dramas That Won Us Over With Their Bromances!.

In Mad Dog, Yoo Ji-tae leads a private insurance investigation team who takes on seemingly impossible to solve insurance frauds while also trying to find out about the plane crash that killed his wife and son. He executes the entire operation and keeps the team together to make sure they reach their end goals.

Moral of the story is Yoo Ji-tae has ample experience to play a mastermind. Only difference being, in the Korean remake of Money Heist, he is getting into some pretty big shoes that is bound to invite comparisons!

(The above story first appeared on LatestLY on Jan 19, 2022 04:48 PM IST. For more news and updates on politics, world, sports, entertainment and lifestyle, log on to our website latestly.com).