Tyga’s album with Decadence, ‘No Introduction’, literally needs no introduction with its hit numbers like ‘Coconut Juice’ and 'Diamond Life' continues to be a favourite for many. As we celebrate Tyga’s 30th birthday, here are the top 5 Tyga Songs that we still lean on! 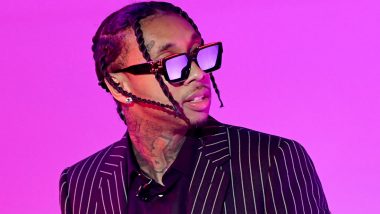 Tyga, the popular hip-hop sensation is all set to bring in his thirtieth birthday on November 19, with all the swag. The multi-talented American rapper, singer, songwriter, actor, and television personality who has been making us fall in love with his music for more than a decade. Born as Micheal Ray Stevenson, his stage name, Tyga is the acronym of 'Thank you God always'. He has given us quite a few feet tapping numbers that have been on our favourite list for the longest of time. Born on November 19, 1989, Tyga entered the world of music in 2007 with his mixtape, ‘Young on Probation’ and went on to sign a record label with independent label DCD2 Records (known then as Decaydance Records). Kylie Jenner and Tyga Bump Into Each Other At Las Vegas Strip Club And Here's What Happened Next!

Tyga’s album with Decadence, ‘No Introduction’, literally needs no introduction with its hit numbers like ‘Coconut Juice’ and 'Diamond Life' continues to be a favourite for many. He went on to release several popular hit songs and his latest album, Legendary also has some gems that we all love. As we celebrate Tyga’s 30th birthday, here are the top 5 Tyga Songs that we still lean on!

This hit number from Tyga’s first his 2008 album, No Introduction, is an all-time favourite for many. The groovy number was used as the background score for Need for Speed: Undercover and Madden NFL 2009 and was also featured in the 2009 movie Fighting.

This 2018 hit from Tyga almost served as the ‘comeback’ record for Tyga and made it to the top 10 of the US Billboard Top 100 list. Featuring Offset of Migos, Taste was one of the biggest songs of summer last year!

Still Got It: Watch Video

This classic collaboration between Tyga and popular Canadian rapper, Drake, has been one of the most successful numbers of the rapper. The number, which was initially leaked in 2010, before its actual release in 2011 with Tyga’s debut studio album, Careless World: Rise of the Last King, also made it to the Billboard Hot 100!

In addition to his professional career, Tyga has also been the talk of the town for his personal life. He was in a serious relationship with popular American model and entrepreneur, Blac Chyna, for more than three years, and they also have a son, King Cairo Stevenson. Tyga also briefly dated reality star and businesswoman, Kylie Jenner, which was heavily covered in the tabloids. However, the two ended things in 2017. The rapper was recently spotted with a mystery woman and is creating quite a stir online! Here’s wishing Tyga a very Happy Birthday!

(The above story first appeared on LatestLY on Nov 19, 2019 11:07 AM IST. For more news and updates on politics, world, sports, entertainment and lifestyle, log on to our website latestly.com).