Kylie Jenner and Tyga Bump Into Each Other At Las Vegas Strip Club And Here's What Happened Next!

Reality star Kylie Jenner and her gal pals ran into her ex-boyfriend Tyga and crew at a Las Vegas strip while celebrating Sofia Richie's 21st birthday. And the happenings of the night are making headlines already. 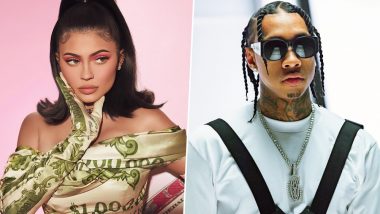 Kylie Jenner is not new to controversies, but this one could be something she needs to worry about, or so we guess! After she turned 22 and celebrated her birthday on a yacht that the entire world witnessed. What the entire world also witnessed last night at Sofia Richie’s birthday party at a strip club in Las Vegas, where Kylie Jenner ‘bumped into’ ex-boyfriend Tyga, but the meeting was apparently not a chanced one but a deliberate one. Yes, you read that right. Kylie Jenner and Baby Stormi Steal Attention at Travis Scott's Look Mom I Can Fly Premiere (View Pics)

As per a report in TMZ, Tyga and gang were the first ones there and when Kylie walked in with her gal pals, the exes ‘did exchange friendly greetings and some chitchat, they didn't hang for very long.’ The report also stated ‘And, for the petty among us who might be keeping score, we're told Kylie did not seek out Tyga -- they just have mutual friends, and the meetup just happened coincidentally.’

Kylie and Tyga dated each other on and off from 2014 to 2017. Soon after, Kylie moved on with Travis Scott, whom she met at Coachella and the duo have an adorable baby daughter Stormi Webster, who recently made her red carpet debut with her star parents at Travis Scott’s Netflix’ documentary ‘Look Mom I Can Fly’ in which, his daughter Stormi Webster is listed as the producer.

(The above story first appeared on LatestLY on Aug 29, 2019 09:01 AM IST. For more news and updates on politics, world, sports, entertainment and lifestyle, log on to our website latestly.com).