DMK leader and former Union Minister, A. Raja while speaking at a seminar at Namakkal threatened that the party must not be forced to revive the separate Tamil Nation demand. 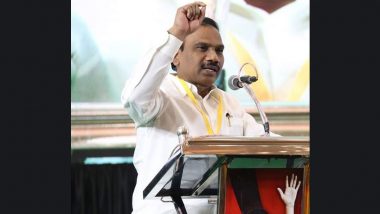 Chennai, July 4: DMK leader and former Union Minister, A. Raja while speaking at a seminar at Namakkal threatened that the party must not be forced to revive the separate Tamil Nation demand.

The DMK leader was speaking at a seminar for party local body representatives, "Autonomy for state, federalism in Centre" at Namakkal on Sunday in presence of Chief Minister, M.K. Stalin. Tamil Nadu Cauvery Protest: PMK Leader Gets Electrocuted in Viluppuram While Demanding Separate Board Committee: Watch Video

Raja, who was once jailed in the 2G spectrum scam issue, said that the DMK will not stop the fight until Tamil Nadu gets autonomy.

He said that even though the DMK follows the path of Periyar, the party kept aside the demand for a separate Tamil Nadu for national integrity and democracy. The DMK leader called upon Prime Minister Narendra Modi and Home Minister Amit Shah to provide autonomy to the state of Tamil Nadu and not to force the party to revive the Tamil Nationhood demand.

He said that the Centre got 6.5 per cent of the GST share but the state got back only 2.2 per cent which was a major discrimination. Raja charged that the Centre enjoyed great powers leaving the states at the mercy of the union government.

(The above story first appeared on LatestLY on Jul 04, 2022 02:22 PM IST. For more news and updates on politics, world, sports, entertainment and lifestyle, log on to our website latestly.com).