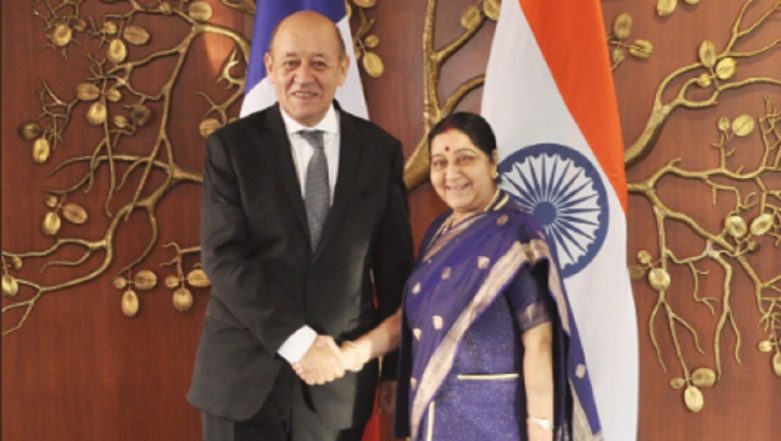 New Delhi, December 15: India and France have agreed to fight terrorism together, French Minister for Europe and Foreign Affairs Jean-Yves Le Drian and India's External Affairs Minister (EAM) Sushma Swaraj said here in a joint statement. Swaraj further stated that Paris and New Delhi are also working together on multiple international forums including Financial Action Task Force (FATF). Committing to the partnership with India, Le Drain said, "This holds true on the strategic front, notably with the strengthening of our exchanges on the Indian Ocean, which today are fast developing, and our shared commitment to fighting terrorism, as we mark ten years since the deadly Mumbai attacks."

Swaraj also informed that the two nations are jointly working on Jaitapur nuclear power project. "As President Macron and Prime Minister Modi had directed us in spring, we have reviewed the status of the EPR project in Jaitapur and adopted an action plan to guides our work for the coming months so as to advance as efficiently as possible towards the final decision for building this power plant," said Le Drian. France Government Urged Donald Trump to Stop Interfering in Its Politics.

20 years of a dynamic and multi-faceted strategic partnership!

EAM @SushmaSwaraj welcomed Foreign Minister of France @JY_LeDrian ahead of the delegation-level talks. This is their second bilateral meeting in six months continuing the momentum of high-level exchanges! pic.twitter.com/pdQR8dlm0Y

"Six EPRs account for a total capacity of almost 10 GW, which is a significant contribution to India's aim of producing 40 per cent of its electricity from non-fossil fuels by 2030, in keeping with its commitments made ahead of the Paris Climate Conference. The Jaitapur project will also contribute to Make in India as it involves transfers of production, technology, joint research, and training," he added. "We have also signed the Status of Progress for Implementation of Industrial Way Forward Agreement today," said Swaraj, adding "India and France have historic defence cooperation; both countries working together in several areas."

Expressing her happiness, Swaraj also announced that Nuclear Power Corporation of India (NPCI) and Electricite de France (EDF) have reached new heights in accordance to the Industrial Way Forward Agreement, which was signed in 2018. Talking about the recently launched heaviest satellite GSAT-11, Swaraj thanked France for their help in the successful launch of the satellite. Revealing that Paris and New Delhi are launching projects in Africa, particularly in the area of sustainable development in connection with the International Solar Alliance, Le Drian said, "Our respective Joint Secretaries for Africa, who held very operational consultations earlier this week, will soon submit a progress report on these joint projects."

The two leaders further asserted that France and India have joined hands to deal with climate change. "As you know, France considers that a strong India is in the world's interest. At the G20 as in climate change negotiations, and tomorrow, I hope, at the UN Security Council, India is a responsible power with which we discuss all key issues. This is what the agenda of our discussions today reflects," French minister stated.

Stating that France and India are among the countries on the forefront of fighting climate change, Swaraj said, "India and France have been working together to deal with climate change." Two leaders also talked about Indo-French bilateral trade relations stating that the two nations agreed that bilateral trade should be increased between India and France. Swaraj also asserted that India wants to have better trade relations with France.

Reiterating that "a strong India" is in the world's interest, Le Drain said that France hopes to discuss key issues with India at not only G20 but also at the United Nations Security Council (UNSC).

"As you know, France considers that a strong India is in the world's interest. At the G20 as in climate change negotiations, and tomorrow, I hope, at the UN Security Council, India is a responsible power with which we discuss all key issues. This is what the agenda of our discussions today reflects," the French minister said. Thanking Le Drian, Swaraj said, "France has consistently endorsed membership in the United Nations Security Council and membership in the Nuclear Suppliers Group, we thank them for this. Apart from this, we have discussed many issues of global and regional interests. Contributions made by Minister Lloyds in further strengthening India's strategic partnership are invaluable. We will be eagerly waiting for his next visit to India."