A total of 18.78 lakh foreigners visited India this year within the first 10 months on E-visa -- four times more than the 4.47 lakh figure registered in 2015 and the highest so far. 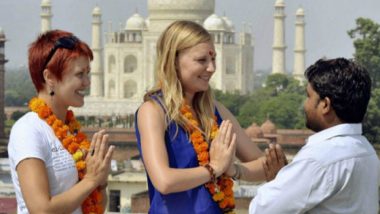 New Delhi, November 14: A total of 18.78 lakh foreigners visited India this year within the first 10 months on E-visa -- four times more than the 4.47 lakh figure registered in 2015 and the highest so far. The maximum number of visitors who availed of this facility were from the UK, the US, China, France and Germany.

A home ministry release said that arrivals between January and October, 2018 also broke last year's record when 17 lakh foreigners visited India on E-visa or Electronic-visa, citing liberalization of the visa regime by India as a reason for the spike in figures.

Nationals of 166 countries can now enjoy these E-visa -- available for five categories such as Tourist, Business, Medical, Conference and medical attendant -- facility at 26 airports and five seaports, and can be availed three times in one year against twice a year earlier, said the release.

The local Foreigner Regional Registration Office (FRRO) has been empowered now to extend the duration of electronic visas beyond 60 days upto 90 days, said the release.

"With the E-visa facility, the foreigner does not have to interact with any Indian official till his arrival at the immigration counter. For foreigners who are already in India and require any consular or visa services like extension, conversion, exit permission or any of the total 27 visa-related services, an online e-FRRO facility has now been launched throughout the country.

"The foreigners do not have to physically visit the offices of FRROs. They can apply as well as receive consular or visa services online after making online payment," it said.

To promote cruise tourism, immigration facilities have been provided at five major seaports where e-landing permits are granted to passengers for their onshore site-seeing.

"The condition of biometric enrolment for such tourists arriving at Mumbai, Cochin, Mormugao, Chennai and New Mangalore ports has also been suspended till December 2020 to ensure faster immigration clearance so that cruise tourists can spend maximum time on shore."

Foreign nationals who fall sick during their stay in India can now avail medical treatment without converting their visa into medical visa, said the release. The Centre is also allowing conversion of any category of visa of a foreigner who is married to an Indian citizen, person of Indian origin or overseas citizen of India (OCI) card holder into an entry visa at any point of time by the FRRO himself.

State governments or the FRROs can now take decision locally and grant Protected Area Permit (PAP) or Restricted Area Permit (RAP) immediately to foreigners intending to visit places which are not open for tourism. Such permits are granted only after a prior reference is made by the concerned state or Union Territories to the Home Ministry.

Earlier, foreigners visiting Andaman and Nicobar Islands required a visa as well as an RAP.

With a view to promoting flow of tourism and investment, 30 Andaman and Nicobar islands have been excluded from the RAP regime, the release said. "Foreigners will also be allowed to visit 11 uninhabited islands, to be notified by Andaman and Nicobar Islands Admn., only for day trips without any RAP."

The Ministry has also reduced minimum remuneration requirement from Rs 7.80 lakh to Rs 3.60 lakh per annum for grant of intern visa which is now available at any time during the course of study.

(The above story first appeared on LatestLY on Nov 14, 2018 07:22 PM IST. For more news and updates on politics, world, sports, entertainment and lifestyle, log on to our website latestly.com).