After Bryce Dallas Howard, Viola Davis Calls Out Their Oscar-Nominated Movie The Help, Says 'Part of Me Feels Like I Betrayed My People' 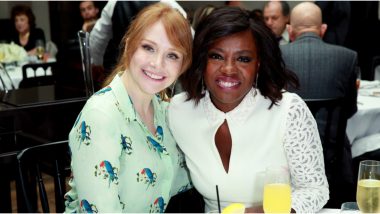 After Bryce Dallas Howard, Viola Davis has also called out their Oscar-nominated The Help. The movie is set during the Civil Rights Movement in 1963 and raises points about racism. During the recent Black Lives Matter movement, The Help became the most-watched title on Netflix. Bryce shared on her Instagram page that she cherishes the friendships that developed while filming, but called out The Help for it "is a fictional story told through the perspective of a white character and was created by predominantly white storytellers." #BlackLivesMatter Movement: 7 Hard-Hitting Movies That Tackle Racism in the USA Which You Should Check Out.

Viola Davis features on the latest cover for the Vanity Fair, which is the first cover shot by a Black photographer in the magazine's history. Viola played the role of maid Aibileen Clark and her performance was mind-blowing. The actress said that she was trying to get in the industry with the film in an interview with the mag. "I was that journeyman actor, trying to get in."

"There’s not enough opportunities out there to bring that unknown, faceless Black actress to the ranks of the known. To pop her," she said.

The Help was criticised by reviewers for it's watered down representation of racism. Interview with VF is the second time Viola has questioned her choice to do the film. In 2018, she told The New York Times, that she regrets doing the movie.

"Not a lot of narratives are also invested in our humanity,” Davis told VF. "They’re invested in the idea of what it means to be Black, but…it’s catering to the white audience. The white audience at the most can sit and get an academic lesson into how we are. Then they leave the movie theatre and they talk about what it meant. They’re not moved by who we were."

The Help takes a humorous route to talk about racism. "There’s no one who’s not entertained by The Help. But there’s a part of me that feels like I betrayed myself, and my people, because I was in a movie that wasn’t ready to [tell the whole truth]," Davis added.

She added that the movie was "created in the filter and the cesspool of systemic racism."

Viola also added that despite the fact that everyone knew her after The Help, acting offers didn't come her way. She became a global star after she featured in the hit TV show How To Get Away With Murder, for 6 seasons - the finale aired earlier this year. She delivered a pathbreaking performance on the series, changing the way we see black actresses. Her character removes her wig and makeup on camera in one episode, is proudly bisexual and is the heroine despite being manipulative, scheming, lying, mean, arrogant, flawed individual.

Viola has said that people ask her why she was on TV for so long when she had a movie career. She said, "I always ask them, What movies? What were those movies?”

"Listen, I got Widows, but if I just relied on the Hollywood pipeline…. No, there are not those roles," she explained.

Bryce played white socialite Hilly in the film, has critically said: "Stories are a gateway to radical empathy and the greatest ones are catalysts for action,"

"If you are seeking ways to learn about the Civil Rights Movement, lynchings, segregation, Jim Crow, and all the ways in which those have an impact on us today, here are a handful of powerful, essential, masterful films and shows that centre Black lives, stories, creators, and/or performers," Bryce concluded.

(The above story first appeared on LatestLY on Jul 15, 2020 05:59 PM IST. For more news and updates on politics, world, sports, entertainment and lifestyle, log on to our website latestly.com).