As per the professor, the converted Biochar can be re-used in the fields for agricultural purposes, which would provide essential nutrients to the soil. 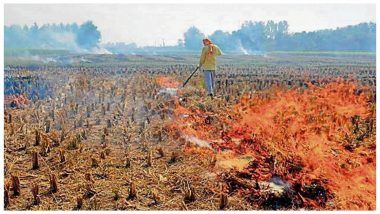 New Delhi, January 15: With crop residue burning in northwest India contributing to a quarter of Delhi's air pollution during winter, a professor from Delhi's Jawaharlal Nehru University (JNU) has claimed to have developed a solution to the problem. According to Professor Dinesh Mohan, the biomass or stubble can be converted into Biochar using a reactor.

Professor Mohan says the conversion of biomass into Biochar would reduce the issue caused due to stubble burning. Biochar is a manmade charcoal material composed of agricultural wastes including manure, crop residues, and forage grasses.

"One of the contributors to pollution in Delhi is stubble burning. Farmers do not have a solution to deal with waste. After working on the situation we found a solution where we can convert stubble or biomass into Biochar which can be used in agriculture," said Prof. Mohan. As per the professor, the converted Biochar can be re-used in the fields for agricultural purposes, which would provide essential nutrients to the soil.

He said the thing that needs to be kept in mind is that amount of oxygen present in the reactor while burning the stubble. Prof. Mohan said that the cost of this conversion is very less and the farmers can easily make the reactor in their field with the help of the mud used for making huts.

"The entire process takes 24 hours to 48 hours. Biochar is a useful product, which can stay in the soil for several years thus benefiting farmers in the long run. It will enhance nutrients in the soil, boost its water holding capacity and productivity. It is a low-cost technique," he said. Delhi-NCR and other northern states face severe pollution and stubble burning is one of the major contributors to the air pollution.