Moral Policing in Kolkata Metro: Couple Thrashed & Beaten for Hugging Each Other by Elderly Passengers

On Tuesday, a group of students protested outside Dum Dum metro station carrying placards against moral policing, and many even questioned the lack of security inside the stations. 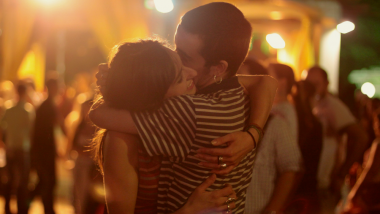 Couple thrashed in Kolkata Metro for hugging each other. (Image used for representational purpose only) (Photo Credits: Pixabay)

Kolkata, May 2: In a another case of moral policing, a young couple was harassed on the Kolkata Metro on Monday night by a mob, consisting mainly of elderly men because they 'hugged' each other and were standing 'too close'. According to reports, the man was kicked and punched, and the woman too was attacked. As per a picture that has gone viral, a woman can be seen trying to shield the man from kicks and punches from strangers in the metro. The couple were heading from Chandni Chowk to the terminal Noapara station around 10 pm.

Some eyewitness said there was no PDA or public display of affection at all. Reportedly, a senior citizen bumped into them while boarding the very crowded coach and an argument erupted and went out of control. Other passengers on the train also joined in and asked them to get a 'get a room' and 'go to a club'. They were thrashed by a group that included middle-aged and elderly passengers.

Yesterday, Kolkata Metro issued a note on their social media account saying that the matter is being probed and that no complaint has been lodged yet. It also mentioned that they are strictly against moral policing.

On Tuesday, a group of students protested outside Dum Dum metro station carrying placards against moral policing, and many even questioned the lack of security inside the stations.

(The above story first appeared on LatestLY on May 02, 2018 08:54 AM IST. For more news and updates on politics, world, sports, entertainment and lifestyle, log on to our website latestly.com).