More Summer Special Trains From Mumbai and Pune Announced by Railways: Passengers are Requested to Book Their Tickets Online Through irctc.co.in

154 more summer special trains are announced from mid-April to May 1st week from Mumbai and Pune to destinations in North & East. Only passengers with confirmed tickets to be permitted. 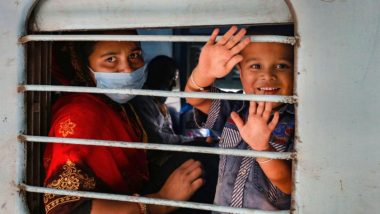 Central Railway is already running regular special trains to various destinations across the country out of which many trains are towards destinations in North and East.

To cater to the extra rush of passengers in the ensuing summer, apart from regular special trains Central Railway has so far run 76 summer special trains towards destinations in North and East during the period from 7.4.2021 to 15.4.2021 from Mumbai/Pune/Solapur area.  Read: Mumbai: Passenger Rush Outside Lokmanya Tilak Terminus After Maharashtra Govt Announced Restrictions, Central Railway Asks People Not To Panic.

Only passengers with confirmed tickets to be permitted

Passengers are requested to book their tickets through www.irctc.co.in and follow regular advertisements about special trains that are announced & social media for regular updates.

Only passengers having confirmed tickets will be permitted to board these special trains.

Passengers are advised to adhere all norms, SOPs related to COVID19 during the boarding, travel and at destination.

(The above story first appeared on LatestLY on Apr 15, 2021 08:49 PM IST. For more news and updates on politics, world, sports, entertainment and lifestyle, log on to our website latestly.com).