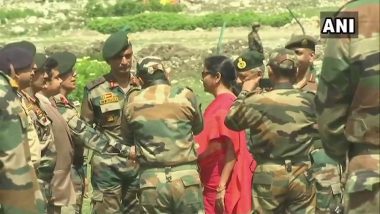 Amarnath Shrine is located in South Kashmir. Each year during summers, devotees from all over India visit the shrine after trekking through mountains. The shrine is dedicated to Hindu god, Lord Shiva. This year the yatra is the longest i.e. for 60 days. As the shrine is located in South Kashmir, there is always a possibility of a terrorist attack. So, during this period security agencies are always on high alert.

Last Year in July, eight pilgrims were killed, while eighteen injured in a terrorist attack. The Lashkar-e-Taiba terrorists attacked a bus of pilgrims. Most of the pilgrims belonged to Gujarat. It was not the first time that terrorists targeted the yatra. On August 2000, 32 people were killed in a terrorist attack at Nunwan base camp in Anantnag district. Out of 32 dead, 21 were Hindu pilgrims. Hizbul Mujahideen claimed responsibility for the attack. Terrorists also attacked the yatra in 2001 and even in 2002.

Amarnath cave shrine is located at 12,756 feet in the Himalayas. There are two routes to visit the shrine. One is from Baltal, which also the shortest path and another one from Pahalgam. The distance between Baltal to the cave is approximately 18 km, whereas, the cave is at around 45km distance from Pahalgam. Shri Amarnath Shrine Board manages the shrine (SASB) that was constituted by an Act of the Jammu and Kashmir State Legislature in 2000.

(The above story first appeared on LatestLY on Jun 25, 2018 05:35 PM IST. For more news and updates on politics, world, sports, entertainment and lifestyle, log on to our website latestly.com).