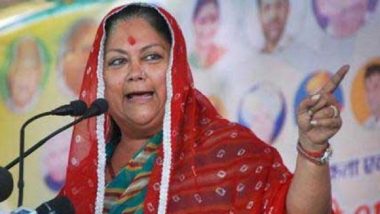 Rajasthan Diwas is celebrated to recall the formation of Rajasthan, which was formed after merging four princely states - Bikaner, Jaipur, Jaisalmer and Jodhpur. (Image: PTI/File)

Jaipur, Mar 30: Chief Minister Vasundhara Raje on Friday extended greetings to the people of her state on the occasion of Rajasthan Diwas. The state government has organised various celebratory and public consciousness raising programs to commemorate the day.

"Greetings on the occasion of #RajasthanDay! This #RajasthanDiwas let’s celebrate the achievements, the victories, the growth and progress of our beautiful and diverse state. #RajasthanSwabhimaan #JaiJaiRajasthan (sic)," Raje said on Twitter.

Rajasthan Diwas is celebrated to recall the formation of Rajasthan, which was formed after merging four princely states - Bikaner, Jaipur, Jaisalmer and Jodhpur. They were being ruled by Jaat, Gujjar, Maurya and the Rajputs.

The merger of the states was inked on March 30, 1949. Hence, the day is annually celebrated as Rajasthan Diwas. The state, however, officially came into existence on November 1, 1956.

The name 'Rajasthan' given to the merger of the four princely states literally means the abode of kings.

(The above story first appeared on LatestLY on Mar 30, 2018 12:26 PM IST. For more news and updates on politics, world, sports, entertainment and lifestyle, log on to our website latestly.com).