Jammu and Kashmir: Major Narco-Terror Module Busted by Baramulla Police Along With Army and CRPF; 10 Arrested

The Jammu and Kashmir Police have arrested 10 persons after busting a major narco-terror module, seizing arms and ammunition, heroin, cash and several vehicles from the arrested persons, officials said here on Saturday. 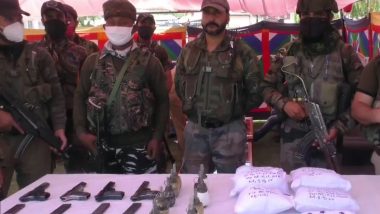 The Baramulla police along with the Army and the CRPF busted the narco-terror module by arresting 10 persons and recovering arms and ammunition, 9 kg heroin and cash from their possession, the police said.  PM Narendra Modi to Chair Meeting With All Political Parties in Jammu and Kashmir on June 24: Reports

"On receiving specific information, the Baramulla police along with the Army and the CRPF signalled a Maruti Swift vehicle to stop at a checkpoint in Bandi Uri in Baramulla district. However the person driving the said vehicle tried to flee from the spot. But the alert joint party stopped the vehicle in which three persons were travelling," the police said.

The trio has been been identified as Sajid Ahmad Shah, a resident of Lalpora Lolab, Kupwara; Sharafat Khan from Keran Kupwara; and Shahid Hussain, a resident of Khaipora Tangmarg.

"During checking, the joint party recovered some quantity of contraband substance (heroin), arms and ammunition along with cash from the said vehicle. All the three persons were arrested," the police said.

The police added that upon questioning, the officers learnt that the said arms and ammunition and contraband substance were received from across the LoC to provide aid to the terrorist outfits. The accused persons also disclosed that some deliveries had been taken by some other parties.

One Hyundai Verna, one Scooty, cash and some contraband substance besides arms and ammunition were seized from their possession.

Meanwhile, a police party from Baramulla assisted by the Jammu police arrested four more accused persons from Jammu. They have been identified as Raman, Rohit and Krishan, all residents of Ferozpur in Punjab; and Fayaz Ahmad Khan from Keran Kupwara.

According to the police, Rs 16 lakh and one Eicher Canter truck were recovered from their possession.

"Besides, three vehicles -- one Eicher Canter truck, one Hyundai Verna and a Maruti Swift -- and a Scooty were also seized," the police said.

(The above story first appeared on LatestLY on Jun 19, 2021 10:19 PM IST. For more news and updates on politics, world, sports, entertainment and lifestyle, log on to our website latestly.com).