Jews to Get Minority Community Status in Gujarat

The community had submitted an application to the government of Gujarat seeking minority community status in August 2017. 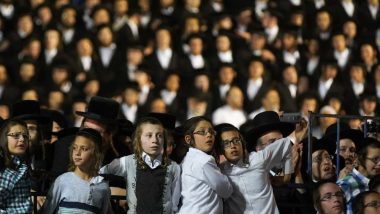 Ahmedabad, Jun 29: Gujarat Chief Minister Vijay Rupani on Thursday announced that Jews living in the state will be granted minority community status. Rupani made the announcement while meeting Israeli prime minister Benjamin Netanyahu during his 10-day visit to the Jewish state.

There are only 168 members of the Jewish community in Gujarat. Therefore, they didn't even figure separately in the Census 2011, and were just mentioned as part of 16,480 'other communities' in the state. Celebrations erupted after CM Rupani made the important announcement.

"Apart from anything else, the status would ensure their property rights to the community. While the synagogue has been provided security, many of the properties related to the community need care," Aviv Divekar, secretary of the Magen Abraham Synagogue, told TOI.

"It was a long-pending demand. The announcement recognizing the small Jewish community goes a long way in not only making us feel safer, but that our presence has been recognized as a minority in the country," Sahitya Akademi winner Esther David was quoted as saying.

The community had submitted an application to the government of Gujarat seeking minority community status in August 2017.

(The above story first appeared on LatestLY on Jun 29, 2018 01:31 PM IST. For more news and updates on politics, world, sports, entertainment and lifestyle, log on to our website latestly.com).