A timber dealer named Rojy Augustine, who is presently in the dock after forest officials alleged that he had felled expensive rosewood trees in Keralas Wayanad, claimed on Thursday that he had cut the trees as per the rules and to get the necessary papers, he had paid Rs 25 lakh as bribe to the forest officials. 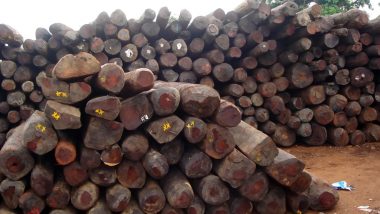 Thiruvananthapuram, June 10:  A timber dealer named Rojy Augustine, who is presently in the dock after forest officials alleged that he had felled expensive rosewood trees in Kerala's Wayanad, claimed on Thursday that he had cut the trees as per the rules and to get the necessary papers, he had paid Rs 25 lakh as bribe to the forest officials.

Incidentally, the issue was raised in the Kerala Assembly by the Congress-led opposition on Tuesday, while the same case surfaced in the Kerala High Court the following day. Supreme Court Orders Eviction of 10,000 Residential Constructions in Aravalli Forest Area, Says ‘Land Grabbers Can’t Take Refuge of Rule of Law’

In an hour long interview given to the Manorama TV that was telecast live, Augustine claimed that he had done no wrong, as he went by the rule book.

"Now that this has become a big issue and the forest officials are in the dock, they want to trap me because they know that they had violated the rules. I cut around 56 trees in my property in Wayanad, besides purchasing a few trees from the neighbouring places as well. The trees were then sold for around Rs 2 crore. I had paid Rs 25 lakh as bribe to various forest officials to get the necessary papers required for the sale and transportation of the timber," Augustine claimed.

He, however, gave a clean chit to the revenue officials as well as the politicians.

On Tuesday, the issue was raised in the Assembly by Congress legislator P.T. Thomas, who had cast aspersions on state Forest Minister A.K. Saseendran, which was quickly denied by the minister, who said that he took over as the Forest Minister only on May 20.

"I have a licensed timber depot, but the business which I did has now turned controversial. I paid 36 per cent tax to the state government and everything I did was done as per the rules. I have filed five cases against the hardships which I am undergoing in this business. I do not have anything to fear as I have done no wrong," Augustine said.

However, S. Badushah, an environment activist in Wayanad, said that he has heard what Augustine had to say, but he didn't believe that all that he said was true.

"Augustine says he had bribed the forest officials, but the two names that he gave are known to be officials with high integrity. I do not think that the revenue department is clean. Moreover, this same person (Augustine) was in the news a few years back for the launch of a mobile phone, which never saw the light of the day. There should be a high court monitored probe into this forest scam," said Badushah.

In a related development, Union Minister of State for External Affairs, V. Muraleedharan, along with Kerala BJP chief K. Surendran met Union Minister of Environment and Forests, Prakash Javadekar, at his office in Delhi on Thursday and asked for a detailed probe by his department into the way permission was given by the Kerala government for mass felling of rosewood trees, which, according to media reports, are worth Rs 130 crore.

(The above story first appeared on LatestLY on Jun 10, 2021 05:32 PM IST. For more news and updates on politics, world, sports, entertainment and lifestyle, log on to our website latestly.com).