Mob Lynching: The Video Responsible for Deaths in India Was Originally Shot in Pakistan With a Positive Intention!

The Indian government has demanded Whatsapp to increase the levels of vigilance and prevent the spread of rumours. 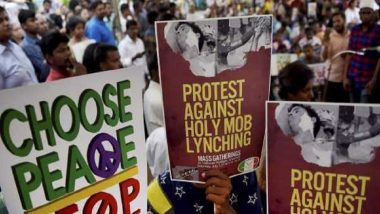 There has been a tremendous increase in mob violence and lynching incidents being reported across the country, and the reason for these crimes is sometimes as small as a WhatsApp forward. These social media messages have added fuel to people's suspicion and have helped in spreading rumours. According to an Economic Times report, a modified version of a video that was made for Karachi based Roshni Helpline’s Facebook page is being shared where the main crux of the original video has been removed.

The original video shows young kids playing with their friends, and two men came on a motorcycle and kidnapped one of the children. His panicked playmates then ran after the bike to catch the abductors, and in the next footage, it is shown that they return to the spot. One of the bikers holds up a message saying ‘It takes only a moment to kidnap a child from the streets of Karachi’ and urging parents to be more vigilant.

The original film intended to promote awareness, and it even helped to reunite ten children with their parents, but in the distorted version that is doing the rounds on social media, it has caused terrible damage. According to reports, 27 people have been lynched across nine states, by hostile mobs believing them to be kidnappers. The Indian government has demanded Whatsapp to increase the levels of vigilance and prevent the spread of such rumours.

So always keep you eyes and ears open in today's social media age. Don't believe in any message or video blindly, and if you have any doubts on the authenticity, never share it with other people in your list.

(The above story first appeared on LatestLY on Jul 11, 2018 03:39 PM IST. For more news and updates on politics, world, sports, entertainment and lifestyle, log on to our website latestly.com).