Alluri Sitaram Raju Birth Anniversary: Facts to Know About The Tribal Revolutionary Who Rose in Arms Against The British Rule 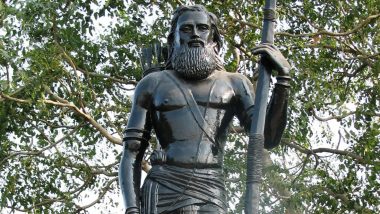 New Delhi, July 4: Alluri Sitarama Raju was one of the tribal revolutionaries of India who rose up in arms against the British Raj. Raju's primary cause of revolt was the 1882 Madras Forest Act that placed restrictions on forest dwellers from accessing the resources. The revolt later turned into a complete armed struggle against the colonial rule in the region. Here are some facts to know about the pre-independence icon.

Raju was born on July 4 either in the year 1897 or 1898, with historians not being able to arrive at a consensus on his date of birth. He was born into a tribal family based in Pandrangi, located in Visakhapatnam district of Andhra Pradesh. Mangal Pandey 163rd Death Anniversary: 11 Interesting Facts About the Brave Freedom Fighter.

Raju harnessed on the anti-British sentiment that was bolstered in aftermath of the 1921 non-cooperation movement, and subsequently called for an armed rebellion against the colonial forces and their collaborators based in the region.

Before turning into armed revolutionary, Raju had attempted to seek the revocation of 1882 Forest Act using Gandhian methods of non-cooperation and civil  disobedience. He launched the Rampa Rebellion in 1922 to protest against the seizure of forest usage rights from the tribal populace.

After the non-cooperation movement waded out, Raju, according to  historians, eventually led a band of tribal people and other sympathisers to battle against the oppressive colonial forces. Most of the combat was centred in the border areas of the East Godavari and Visakhapatnam regions of Madras Presidency.

After his brief armed struggle, Raju was captured by the British forces in the forests of Chintapalli. He was martyred in a brutal manner, with his body being tied to a tree in Koyyuri village and shot using gunfire. Raju's tomb is located in Krishna Devi Peta village.

(The above story first appeared on LatestLY on Jul 04, 2020 09:29 AM IST. For more news and updates on politics, world, sports, entertainment and lifestyle, log on to our website latestly.com).