A day after five people lost their lives after consuming spurious liquor in Uttar Pradesh’s Ambedkar Nagar district, in-charge of Jaitpur police station and four constables were suspended on Wednesday. The UP police also arrested five people in connection with the incident. 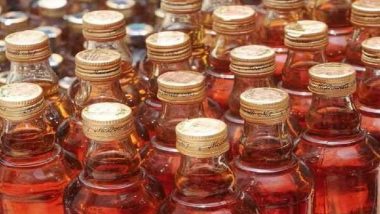 According to a report published in the Hindustan Times, out of the five people, four died on Monday and one on Tuesday. Among the deceased were two brothers, Mahesh Chauhan and Jaisraj Chauhan. A total of 12 people fell ill after consuming the spurious liquor purchased from Mittupur village in the Ambedkar Nagar district. Remaining seven people are reportedly in critical condition. COVID-19 Lockdown Extended in Uttar Pradesh Till May 17.

During treatment, five people -- four from Makhdoompur and one from Shivpal village – died. The liquor was bought by one Sonu of Shivpal village from somewhere in Azamgarh district. Country made liquor shop owner was among thje five arrested.

Notably, the tragic incident took place at the time when there was a complete lockdown in Uttar Pradesh to curb the rise in COVID-19 cases. It will remain in place till May 17.

(The above story first appeared on LatestLY on May 12, 2021 12:56 PM IST. For more news and updates on politics, world, sports, entertainment and lifestyle, log on to our website latestly.com).