Renowned filmmaker Anurag Kashyap on Friday asked the students to be patient and perceive their goal to protests against the Citizenship Amendment Act, adding that 'non violence' is the key to success. 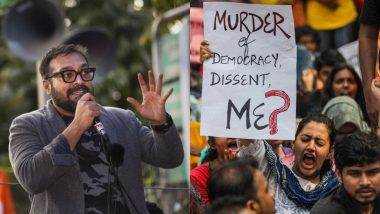 New Delhi, February 14: Renowned filmmaker Anurag Kashyap on Friday asked the students to be patient and perceive their goal to protests against the Citizenship Amendment Act, adding that 'non violence' is the key to success. The Gangs of Wasseypur filmmaker also termed the protests against CAA can only succeed as people's main weapons in their movement against the law is 'non-violence'.

Addressing an anti-CAA rally in Jamia on Friday, Kashyap said, "Our battle will have to be fought with patience, not violence. It is key. This won't take one or two days. We have to stand strong until we get the answer to all our questions." Adding on, he also said that they have a long battle ahead of them, so patience is the key. He said, "This is a very long fight. It won’t end tomorrow, the day after or with the next election. But you need to have a lot of patience for this. They are waiting for people here to get tired and go home. So we need to have patience and stick to your ground" Anurag Kashyap Calls PM Narendra Modi ‘Urban Nazi’, Cites Adolf Hitler’s Speech in Reference (Watch Video).

Applauding the united movement against the CAA, National Register of Citizens and updation of National Population Register, Kashyap said, "From Jamia to JNU, the agitation spread across the country. For the first time, it seems like we are one country. We have to take back our country and Constitution." He ended his speech with 'Inquilab Zindabad' (long live the revolution). Soon after addressing the rally, the filmmaker also ate Biryani, which had become the point of debate during the Delhi Assembly Elections 2020.

Stating that he had left everything and shut his Twitter, but claimed that he couldn't resist after what happened in Jamia Millia Islamia in December last year. Kashyap said, "I had left everything and went away but I changed my mind after what happened in Jamia in December. I saw a video of a girl and that gave me courage to return to Twitter. Now I will not stay silent."

It is to be known that Kashyap, maker of controversial movie 'Black Friday' had slammed the Union government for its policies like CAA, NRC and NPR. Also, Kashyap had been vocal against the unruly behaviour of police on students who stood against them after facing brutality post protests. In January this year, he was sitting in solidarity with the Jamia and JNU students at the Gateway of India in Mumbai.

(The above story first appeared on LatestLY on Feb 14, 2020 10:04 PM IST. For more news and updates on politics, world, sports, entertainment and lifestyle, log on to our website latestly.com).