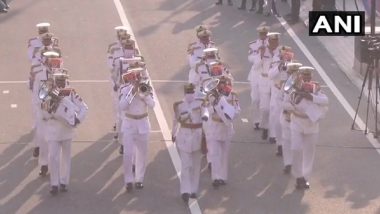 On the eve of the Independence Day, Attari-Wagah border witnessed jubilant celebrations.  The beating retreat ceremony, an elaborate ritual of lowering the national flags of both the countries just before the sunset, took place as it does every year, followed by a musical performance by the Border Security Force (BSF) band. Independence Day 2020 Celebrations: BSF Band's Musical Performance Follows Beating The Retreat Ceremony at Attari-Wagah Border; Watch Videos.

Live Streaming of Beating The Retreat:

Earlier in the day, PM Narendra Modi unfurled the National Flag for the seventh time from the ramparts of the Red Fort. In his address. PM Modi gave a stern warning to China and Pakistan. He also spoke on a range of issues including coronavirus vaccine.

(The above story first appeared on LatestLY on Aug 15, 2020 06:15 PM IST. For more news and updates on politics, world, sports, entertainment and lifestyle, log on to our website latestly.com).