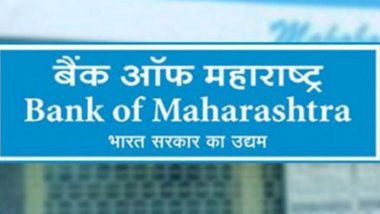 Pune, October 16: State-run Bank of Maharashtra has approached the Pune Police against "fake news" being spread on messaging app WhatsApp and other social media platforms after reports said the bank is likely to meet the fate of crisis-hit Punjab and Maharashtra Cooperative (PMC) Bank. In its BSE filing, Bank of Maharashtra said that it has lodged a complaint with Pune police and cyber cell against the circulation of fake news and spreading of rumours about its financial health. PMC Bank Depositor Dies of Cardiac Arrest, Second Death in Less Than 24 Hours.

Bank of Maharashtra shared details of the news portal and Twitter handles that allegedly spread misinformation about its financial health. "The bank is well capitalised and having a strong loyal customer base of more than 27 million customers and it is growing from strength to strength. The published wrong information about Bank of Maharashtra is misguiding the public in general with an ulterior motive," it said. Waryam Singh, Ex-PMC Bank Chairman, Owns Rs 400-Crore Business Hotel in Amritsar, Land Worth Rs 2,500 Cr in Juhu: Reports.

Bank of Maharashtra's Ad About Its Financial Health:

#BankOfMaharashtra puts up this ad to say all is well with the bank. Let’s not create panic by imagining things. ⁦@RBI⁩ also issued release on stability of banking system. Few frauds will not derail it pic.twitter.com/bLSp0aug5Z

This came after a news report said that the Reserve Bank of India denied permission to settle Bank of Maharashtra's accumulated losses of Rs 7,360 crore against the balance lying in its share premium account and revenue reserve account. A post was reportedly shared on WhatsApp with this report claiming that the state-run bank has run out of cash and restriction on withdrawals by depositors would be imposed like happened with customers of the PMC Bank.

Refuting claims made on social media, Bank of Maharashtra said that while it has approached the RBI for a mere accounting adjustment of losses against its reserves, by not doing so the financials of the bank will remain sound and unchanged. "Drawing a similarity of the conditions of BoM with some other banks that have faced action from RBI based on realty sector fraud is outstretched and false," it said.

"Figures mentioned in the news on fraud involving BoM is grossly misleading/incorrect. Our exposure to the defaulting reality sector companies is meagre and has very little impact on the bank's balance sheet and profitability," it added. The state-run bank also released an advertisement in newspapers and said that its financial position continues to be absolutely safe and sound.

The RBI has placed stringent limits on cash withdrawals by depositors of the PMC Bank after finding irregularities in sanctioning loans. The central bank had barred people from withdrawing more than Rs 1000 initially; later it was raised to Rs 25,000 and on Monday (October 14) to Rs 40,000.

(The above story first appeared on LatestLY on Oct 16, 2019 01:30 PM IST. For more news and updates on politics, world, sports, entertainment and lifestyle, log on to our website latestly.com).