The team headed by the ACP T.Rangappa and Inspector K.T. Nagaraju managed to crack the case. They zeroed in on the accused after analysing CCTV footage, mobile location. On being grilled, the accused spilled the beans. 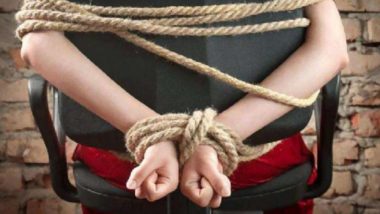 Bengaluru, September 28: Karnataka police have arrested a B.Com student on charges of kidnapping a 14-year-old boy to arrange a fee amount for continuation of studies here, police said on Wednesday.

The arrested student has been identified as M. Sunil Kumar (23), a B.Com student who studied in an evening college. The police have also arrested his aide Y.V. Nagesh, a resident of Mandikal in Chikkaballapur town.

According to police, the accused had kidnapped Bhavesh, the son of a corporate company manager Ramesh Babu on September 2 at his residence in Manyata Layout. The accused knew that Bhavesh slept in the cellar room alone. Mumbai Shocker: Muslim Man Stabs His Former Hindu Wife to Death for Not Wearing ‘Burqa’ in Tilak Nagar, Arrested.

The accused had covered his face with a mask and knocked on the door of Bhavesh's room. When he opened the door, the kidnappers threatened him with a knife, took him away in his father's car.

Next day, the accused made a call to the boy's father from his mobile and demanded Rs 15 lakh as ransom for the release of his son. Ramesh Babu and his wife arranged the money and paid them.

He was asked to place the cash bag near a railway track in the outskirts of the city. The accused had collected the money and released Bhavesh. After getting back his son, Ramesh Babu had lodged a complaint with the Sampigehalli police.

The team headed by the ACP T.Rangappa and Inspector K.T. Nagaraju managed to crack the case. They zeroed in on the accused after analysing CCTV footage, mobile location. On being grilled, the accused spilled the beans.

Police said that the bungalow has been fitted with 18 CCTV cameras. Sunil Kumar told police that he took to crime to pay his college fee. He worked as a construction labourer and a gardener. He could not pay the fee and none of his friends helped him. Jharkhand Shocker: Family Brutally Thrashed, Forced to Consume Human Excreta Over 'Witchcraft' in Dumka; Six Accused Held.

He had gone to carry out garden work at Bhavesh's house a few months ago. The accused had spoken to Bhavesh and planned that if the boy was kidnapped, he could make money. He had shared his idea with cab driver Nagesh who agreed to the kidnap plan.

After getting the ransom money, the accused had paid his college fee. He had also given an advance amount for a room in Yelahanka. He had purchased a new bike and digital camera and kept the remaining money with him. Further investigation is on.

(The above story first appeared on LatestLY on Sep 28, 2022 09:50 AM IST. For more news and updates on politics, world, sports, entertainment and lifestyle, log on to our website latestly.com).