Various farmers' organisations have called for a "Bharat Bandh" on Monday in protest against the t here far laws passed by the Centre last year in September. The call for the bandh has been given by the Samyukta Kisan Morcha (SKM). It is an of over 40 farm unions, which is spearheading the farmers' agitation against the laws. 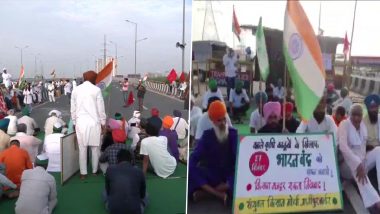 New Delhi, September 27:  Samyukta Kisan Morcha (SKM), an umbrella organisation of around 40 farm unions, gave a call for 'Bharat Bandh' on September 27, Monday as a part of their agitation against the three farm laws passed by the centre. SKM termed to the response to their call as 'historic' and 'unprecedented. "Reports have been pouring in about the overwhelmingly positive and resounding response to the Bharat Bandh call to mark 10 months of peaceful protests with rightful demands from the 'annadaatas' of the country," it said in a statement, reported PTI. Bharat Bandh Today: Commercial Establishments and Industries Likely to be Affected as Farmers' Unions Call For Nationwide Protest.

The bandh began at 6 am and continued till 4 pm. Around 25 trains were affected due to the nationwide protest. Notably, more than 20 locations were being blocked in Delhi, Ambala, and Firozepur divisions.  The markets remained open in the national capital and business mostly went unaffected, though massive traffic disruptions were reported from various places in Delhi due to blockades.

Hundreds of farmers on Monday blocked major highways, including National Highway 1, linking Delhi with parts of Haryana and Punjab. The traffic across Punjab and Haryana was affected due to the bandh. Delhi-Amritsar National Highway was blocked at Shahabad in Haryana's Kurukshetra by protesting farmers.

Traffic diversions were seen for hours as farmers, farm labourers, commission agents, trade, and employee unions blocked the highways. Farm unions announced that they would close all the borders connecting to the national capital. Massive traffic congestion was also reported at Delhi-Gurugram border.

Farmer organisations have called a Bharat Bandh in continuation of their protest against the three farm laws.

Visuals from Singhu (Delhi-Haryana) border, where protesters speak with the people moving through the area. pic.twitter.com/FzuQtRabSQ

Ambulances, doctors or those going for an emergency can pass through. We've not sealed down anything, we just want to send a message. We appeal to the shopkeepers to keep their shops closed for now and open only after 4pm. No farmer is coming here from outside: Rakesh Tikait, BKU pic.twitter.com/HaBDbFFKLT

The farmersalso parked tractors on highways and major link roads in both Punjab and Haryana. Police were deployed in large numbers in Punjab and Haryana to avoid untoward incidents. Meanwhile, Punjab Congress Chief Navjot Singh Sidhu asked party workers to support the bandh. The All India Bank Officers' Confederation (AlBOC) also extended its support to the 'Bharat Bandh' called by Samyukta Kisan Morcha on September 27.

The traffic movement has been closed from Uttar Pradesh towards Ghazipur due to protest. pic.twitter.com/Tvobcyz9FD

Farmers also blocked the Ghazipur border. Due to this, the traffic movement has been closed from Uttar Pradesh towards Ghazipur. In Uttar Pradesh, Bahujan Samaj Party (BSP) chief Mayawati announced her party's support to the nationwide agitation. Meanwhile, Public transport, including the Delhi Transport Corporation (DTC) buses and the Delhi Metro, were operational on Monday despite the Bharat Bandh.

In Karnataka, various organisations also protested outside Kalaburagi Central bus station as farmer organisatons call for Bharat Bandh today against 3 farm laws "Many organizations are supporting our farmers and participating in the nation-wide call for bandh," says protester K Neela. Meanwhile,  shops are closed also in Kerala's Thiruvananthapuram. Trade unions affiliated to LDF and UDF has support the call for Bharat Bandh today against the three farm laws.

The farm union chose September 27 for the Bharat Bandh call because on this date last year, the three bills were brought into force. They have decided to observe it as a Black Day. Farmers have been sitting on protest at three borders of Delhi-Singhu, Tikri and Ghazipur since November 2020.

(The above story first appeared on LatestLY on Sep 27, 2021 08:53 AM IST. For more news and updates on politics, world, sports, entertainment and lifestyle, log on to our website latestly.com).