A seven-year-old boy died of rabies in Kozhikode district of Kerala on Thursday. The deceased was identified as MK Anand. 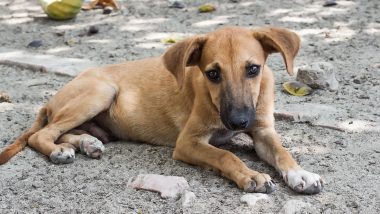 Kozhikode, October 10: A seven-year-old boy died of rabies in Kozhikode district of Kerala on Thursday. The deceased was identified as MK Anand, a class 2 student of the Alanthatta AUP School. Anand was bitten by a rabid dog last month. He died while undergoing treatment at the Kozhikode medical college hospital (KMCH). Notably, he had received three doses of anti-rabies vaccine and antirabies serum (ARS) treatment. Ludhiana Shocker: Boy Hides Dog Bite From Parents, Dies of Rabies.

Anand was son of Thomas and Bindu who hail from Alanthatta in Kasaragod. On September 13, Anand was playing in his house compound when a rabid dog had attacked him. He had sustained multiple bite injuries on his face, above his eye and on the hand. According to a report by Times of India, the boy was administered first dose of anti-rabies vaccine on the day of the bite itself at the Kanhangad district hospital. Rabies: How to Spot a Rabid Animal – 10 Signs and Symptoms to Look Out For.

Anand received the second and third doses on September 16 and 20, respectively. Before he could take the final dose due on October 11. he developed symptoms of rabies. He was taken to the Kanhangad district hospital which referred him to the Kozhikode medical college hospital. He eventually died of rabies on October 7.

"The bite was severe as the wound injuries were deep. Also the site of the bites — near the eye and face — were in areas which are considered as high risk and it could be the cause of the infection despite being provided vaccination," Deputy DMO Dr Manoj AT was quoted as saying.

(The above story first appeared on LatestLY on Oct 10, 2021 10:42 AM IST. For more news and updates on politics, world, sports, entertainment and lifestyle, log on to our website latestly.com).