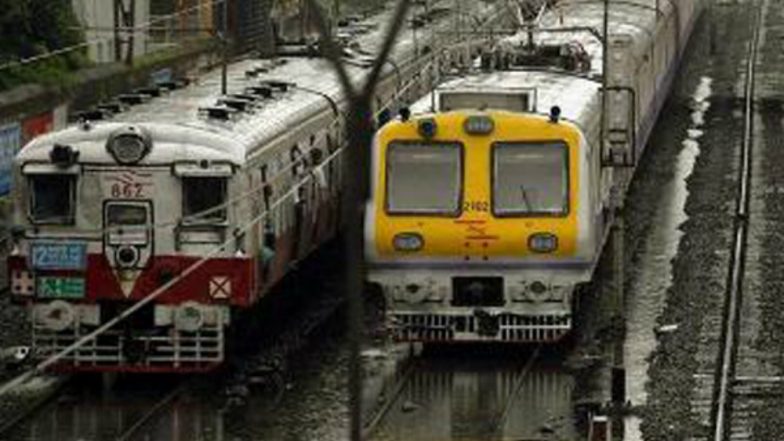 Mumbai, January 9: The Central Railway (CR) will operate its first air-conditioned local train on the Thane- Vashi-Panvel Trans-Harbour route once it gets final approval from the Railway Board, a senior official said on Thursday. General manager of the Central Railway (CR), Sanjeev Mittal, said they are waiting for the approval from the Railway Board, the apex decision-making body of the national transporter, for commissioning of the AC service.

"The first AC local will operate on the Trans-Harbour route. It will replace one of the existing local trains," Mittal told reporters at the Chhatrapati Shivaji Maharaj Terminus. Central Railway Carried 'intensive Drive' Against Irregular Travel in Disabled, 1st Class Coaches.

In December 2019, the CR had received the first AC local for the Mumbai suburban network from Chennai-based Integral Coach Factory. The AC local, which is currently undergoing various safety trials, will take another 8-9 days to operate in public service, the official said.

"The date of operation of the AC local is yet to be finalised. It will be decided after we receive approval from the Railway Board," he added. The CR's AC rake is the city's fifth with four locals already being operated by the Western Railway (WR), which runs the country's only AC suburban railway service.

The WR had received the first AC local, fitted with the indigenous 3-phase propulsion system of BHEL, in May 2017. After undergoing various safety trials for months, it was pressed into service from December 25, 2017.

According to railway officials, the majority of features of the AC local are similar to the locals in the fleet of WR, except the height. The height of CR's AC local has been reduced due to several British-era bridges on the tracks.

The CR has already announced that a motorwoman will operate the first AC local when it is commissioned. The Trans-Harbour corridor is one of the four different corridors of the CR, where over 262 suburban services are operated daily.