According to the service rules, a candidate has to be a graduate for the post of DSP in Punjab. 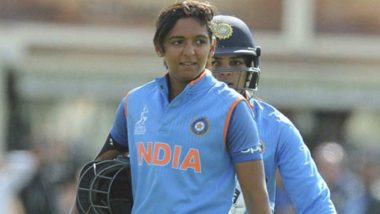 Chandigarh, Jul 10: Indian Women's T-20 Captain and vice-captain of women's national team Harmanpreet Kaur, who was appointed as a deputy superintendent of police (DySP) in March this year on the basis of her sporting credentials, may be demoted to the rank of constable after her graduation degree was found to be "fake" by Punjab Police.

"As her graduation degree was found to be fake, Harmanpreet's qualification can now be treated as Class XII. So she can be given the post of constable which matches her educational qualification," said a senior government official.

The government, however, is yet to take a final decision as the home department has sought comments from the director general of police on this matter.

"The file (pertaining to Harmanpreet) has been sent to the DGP office for his comments," a senior official of the Home Department said. According to the service rules, a candidate has to be a graduate for the post of DSP in Punjab.

The Punjab police during verification of Harmanpreet's testimonials had found her graduation degree from Chaudhary Charan Singh University (CCSU), Meerut, as "fake".

Harmanpreet who had come to Mohali on July 3 for an event had told media, "I am aware of it (controversy), the government is taking care of that. I am hoping for a positive response."

Harmanpreet's father Harmandar Singh had earlier claimed that the testimonials of his daughter were "genuine".

He had claimed that his daughter got the job of office superintendent at the Western Railway on the basis of the graduation degree.

Indian women's T20 captain was appointed a DySP Punjab police in March this year. The Punjab chief minister Captain Amarinder Singh had offered the post of DySP to Harmanpreet in July last year, following her scintillating performance in the Women's World Cup 2017.

Harmanpreet was earlier employed with the Indian Railways but was relieved from her duties earlier this year after she put in a request to join Punjab police.

The Punjab government had also taken up the matter with the Railway Ministry to waive the bond condition and allow Harmanpreet, who is a native of Moga, to join as a DySP in Punjab Police from March 1.