Devotees Should Not Rub Shivalingam at Mahakaleshwar Temple in Ujjain, Says Supreme Court

The bench has posted the matter for further monitoring and consideration of the compliance report in the second week of January 2021. It noted that the temple committee is regulating the entry into the ‘garbh griha’ and during the COVID-19 pandemic, no access is permitted. 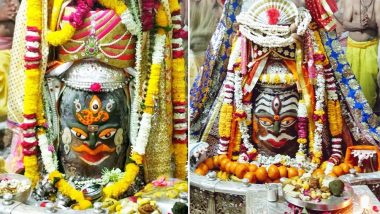 New Delhi, September 1: The Supreme Court Tuesday took note of the deterioration and erosion of Shivalingam at the ancient Mahakaleshwar Temple in Ujjain and directed that devotees should “do no rubbing” of the lingam. The apex court directed the temple committee to ensure that the pH value, which is used to specify the acidity or basicity, of ‘Bhasma’ during ‘Bhasma Aarti’ is improved and the Shivalingam is preserved from further deterioration.

Passing a slew of directions to preserve the Shivalingam at the ancient temple, a bench headed by Justice Arun Mishra directed the temple committee to implement the best methodology to prevent any further damage. The top court said it should be ensured that no visitor or devotee rub the Shivalingam at any cost. Reopen All Places of Worship in India to Avoid Mass Depression, Says VHP.

“If it is done by any devotee, accompanying Poojari or Purohit shall be responsible for not stopping the rubbing. No rubbing of Shivalingam to be done by anyone except during traditional puja and archana performed on behalf of the temple,” said the bench, also comprising Justices B R Gavai and Krishna Murari.

The bench, which delivered its judgement on the issue related to the temple, referred to reports of a committee consisting of experts of Archaeological Survey of India and Geological Survey of India and also that of the temple committee. “To preserve the Shivalingam, we direct that: (a) any devotee should do no rubbing of the Shivalingam,” it said.

The bench noted that expert team had visited Ujjain on January 19 last year and its report indicated that there was erosion of Shivalinga after the last inspection and it is a continuing process. It directed that expert committee “shall visit the temple and submit a report by December 15, 2020, as to the steps to be taken to prevent deterioration of Shivlinga and the steps to be taken to preserve the temple structure, including Chandranageshwar Temple”.

It directed the committee to do a yearly survey and submit a report in the court. “The temple committee to find out a way and consider whether it is necessary to use the metal mund mala on the Shivalingam, or there can be a way out to use mund mala and Serpakarnahas without touching the Shivalingam. Possibility of further reducing weight may also be found out to prevent mechanical abrasion,” it said.

The bench said rubbing of curd, ghee and honey on Shivalingam by devotees is “also a cause of erosion” and it would be appropriate that only pouring of a limited quantity of pure milk is allowed by the temple committee. “Whereas in the traditional puja to be done on behalf of the temple, all pure materials can be used,” it said.

The bench said that entire proceedings of ‘puja’ and ‘archana’ in the ‘Garbh Griha’ (sanctum sanctorum) be video recorded 24 hours and preserved for at least six months. It said that temple committee shall provide pure milk from its resources to the visitors and devotees for offering and should ensure that no impure or adulterated milk is offered.

“The temple committee shall provide water from ‘Koti Thirth Kund’ filtered and purified and further maintain the required pH value,” it said. The bench noted that the Central Building Research Institute (CBRI), Roorkee had visited the temple in September 2019 and submitted a structural assessment proposal.

The bench also dealt with the issue of plan prepared by the Ujjain Smart City Limited for comprehensive development of the temple and its surrounding areas. It directed Ujjain Smart City Ltd to undertake ‘Mahakaal Rudrasagar Integrated Development Approach’ (Phase I and Phase II) forthwith and submit a detailed project report and time frame within six weeks in the court.

“Let the details of necessary repairs, maintenance, and improvement be worked out and carried out forthwith. Let the Collector prepare a comprehensive plan for this purpose with the help of the superintendent engineer and available architect. The state government shall sanction fund immediately,” it said.

It said that original work in the temple is required to be restored. “As assured by the committee, let restoration work be done concerning eyesore painting by December 15, 2020,” it said. The apex court directed the collector and superintendent of Police of Ujjain to ensure that encroachment within 500 metre of the area of the temple premises are removed.

It said that a comprehensive plan be prepared and implemented regarding preservation and maintenance of the Chandranageshwar Temple. The bench has posted the matter for further monitoring and consideration of the compliance report in the second week of January 2021. It noted that the temple committee is regulating the entry into the ‘garbh griha’ and during the COVID-19 pandemic, no access is permitted.

“Of late, it is seen that unfortunately the performance of necessary rituals is the most neglected aspect in the temples, and new Poojaries do not understand them; the same should not be the state of affairs. There is no scope for commercialization,” it said. It said that the court cannot direct what kind of pooja­archana rituals should be performed.