DMK MP Kanimozhi on #BoycottChhapaak Trending After Deepika Padukone's JNU Visit: 'I Don't Watch Many Hindi Movies, But They Are Making People Like Me Watch Her Movies'

Earlier in the day, Kanimozhi met Jawaharlal Nehru University Students' Union President Aishe Ghosh in the campus. What was discussed in the meeting is not known. 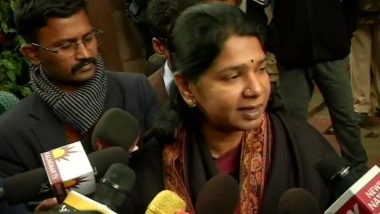 New Delhi, January 8: Actress Deepika Padukone on Tuesday visited the JNU campus to show her support and solidarity with the students against the violence that took place in the campus recently. A social media campaign urging people to boycott Deepika's latest movie Chhapaak started trending on Twitter immediately. Commenting on it, DMK MP Kanimozhi said, " I don't watch many Hindi movies, they're actually making people like me go and watch her movies and support her."

Earlier in the day, Kanimozhi met Jawaharlal Nehru University Students' Union President Aishe Ghosh in the campus. What was discussed in the meeting is not known. On Sunday, in a violent attack, more than 30 students including Ghosh were injured. Masked men armed with rods, hockey sticks attacked the students. Deepika Padukone's JNU Visit: Twitter User Discovers How Same Movie Ticket Was Booked And Cancelled by Multiple Netizens Trending #BoycottChhapaak; See Tweets And Images.

DMK MP Kanimozhi on a social media campaign to boycott Deepika Padukone's movie after she joined students at Jawaharlal Nehru University,during protest over #JNUViolence y'day: I don't watch many hindi movies, they're actually making people like me go&watch her movies&support her https://t.co/vlHJt42Idq pic.twitter.com/liqf2TGCs1

Hostel rooms and lobbies were vandalised during the assault while several vehicles parked on the roads were damaged by the unidentified miscreants. The injured have blamed ABVP for the attack. Several personalities have been demanding justice for the people injured in the violence.

(The above story first appeared on LatestLY on Jan 08, 2020 02:59 PM IST. For more news and updates on politics, world, sports, entertainment and lifestyle, log on to our website latestly.com).