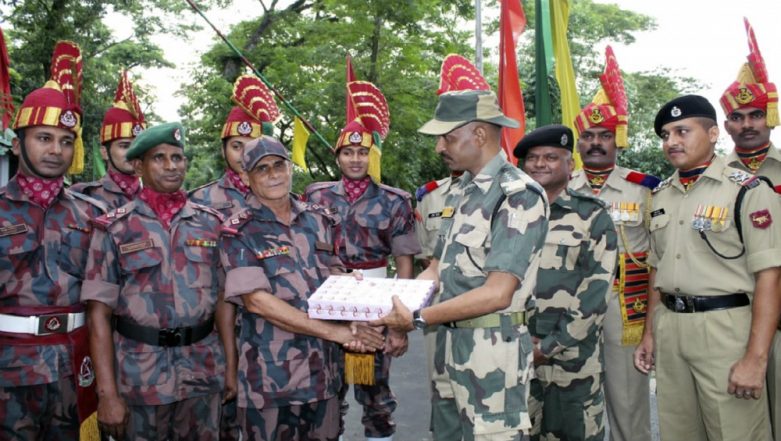 Agartala/Aizawl, Aug 12: The Border Security Force (BSF) and the Border Guards Bangladesh (BGB) exchanged greetings, flowers and sweets on the occasion of Eid, a BSF official said on Monday.

According to the BSF official, senior BSF and BGB officials accompanied by locally posted troopers greeted each other on Saturday and Sunday at many places along the 4,096-km Bangladesh frontier with India's West Bengal, Tripura, Assam, Mizoram and Meghalaya. Eid al-Adha 2019: No Exchange of Sweets Between BSF, Pakistan Rangers at Attari-Wagah Border After Article 370 Revoked in Jammu and Kashmir.

"We exchange greetings and sweets on every important religious and national day event and programmes of both countries," the official said.

Meanwhile, a large number of Muslims also assembled in mosques and Eidgahs to offer special prayers in Tripura.

Large congregation offered prayers at Shivnagar, Shantipara, Gulchakkar, Aralia on the outskirts of the capital city, and other parts of the state including Sonamura (in western Tripura), Udaipur (in southern Tripura), Kailasahar and Dharmanagar (in northern Tripura).

In an unique gesture, Tipu Sultan, a journalist at leading Tripura daily 'Syandan Patrika' donated Rs 10,000 to the Chief Minister's Relief Fund instead of making an animal sacrifice.

"Since last year, instead of making 'qurbani' (animal sacrifice), my family and I donate money to the Chief Minister's Relief Fund," Tipu Sultan said after handing over a cheque to Chief Minister Biplab Kumar Deb on Sunday night.

Appreciating the gesture, Deb said: "I believe everyone will be influenced by his (Tipu Sultan) noble gesture."

The Chief Minister and Governor Ramesh Bais have greeted the people of the state on the occasion of Eid.

In Christian-majority Mizoram, thousands of devout Muslims offered special prayers in Bara Bazaar, Zarkawt as well as at other mosques and Eidgahs in the state.