Climate activist Disha Ravi was sent to three-day judicial custody in connection with the Greta Thunberg "toolkit" case. Disha Ravi was produced before the Delhi High Court on Friday at the end of her five-days police custody. 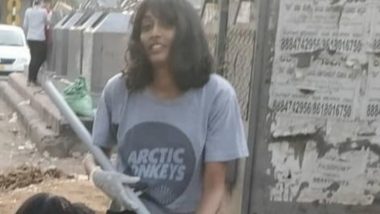 The police said that another accused in the case, Shantanu would join the investigation on February 22, so they need Ravi's custody for three more days. "She has been evasive in giving replies. We have served notice to co-accused Shantanu, who will be joining the investigation on February 22. She has to be confronted with co-accused," Public Prosecutor Irfan Ahmed told the court.

Ahmed added, "During the course of interrogation, Disha Ravi has shifted the blame on Nikita and Shantanu. All the accused need to be confronted with one another. That's why three days judicial custody is being sought." Notably, the climate activist's bail application will come up for hearing on February 20. Greta Thunberg Toolkit Case: Delhi HC Issues Notice to News Broadcasting Standards Authority And News Channels on Disha Ravi's Petition Leaked WhatsApp Chats.

Advocate Sidharth Aggarwal represented Ravi in the trial court. The climate activist was arrested from Bengaluru on February 13. She was taken to Delhi by flight. Ravi was produced before a Delhi Magistrate the next day and remanded to police custody till February 19.

On February 18, Disha moved the Delhi High Court seeking a direction to the Delhi Police to not leak any investigation material in relation to FIR filed against her to any third party, including the media. The court then issued notice to News Broadcasting Standards Authority and news channels, including News18 and Times Now.

On February 14, the Delhi police also alleged that Ravi started WhatsApp Group and collaborated to make the Toolkit document, the police said, adding that she worked closely with them to draft it. The third accused in the case was granted three weeks transit anticipatory bail to Mumbai-based activist lawyer Nikita Jacob by the Bombay High Court.

(The above story first appeared on LatestLY on Feb 19, 2021 06:26 PM IST. For more news and updates on politics, world, sports, entertainment and lifestyle, log on to our website latestly.com).