Gujarat Shocker: Man Beaten With Stone, Iron Rod After He Objects to Being Photographed in Ahmedabad

The incident took place on November November 22. Vadher said that the woman identified as Astha Kadu was clicking pictures of him. In his complaint, Vadher stated that when he stopped the woman from photographing him, she threatened to defame him. 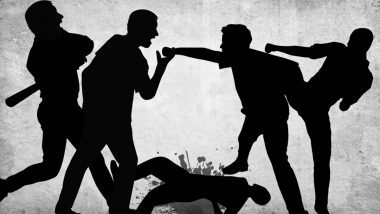 Mumbai, November 28: In a shocking incident that took place in Gujarat, a man was alleged attacked by two men after he objected to being photographed in Ahmedabad. As per reports, the incident came to light after the 41-year-old man, a resident of Shela area lodged a complaint with Bopal police.

According to a report in the Times of India, the man in his complaint said that two men allegedly attacked him after he objected to being photographed by one of their wife's clicking a picture of him. The complainant identified as Piyush Vadher said that he saw a woman clicking pictures of him. Ahmedabad Shocker: Domestic Worker Molests Home Alone Woman in Anandnagar; Complaint Filed,

The incident took place on November November 22. Vadher said that the woman identified as Astha Kadu was clicking pictures of him. In his complaint, Vadher stated that when he stopped the woman from photographing him, she threatened to defame him.

On hearing his wife's fight, Aastha's husband Sangram Kadu intervened and started threatening Vadher. The complainant said that Sangram dared him to come down to the parking area while he threatened to damage his car. Surprisingly, when Vadher went to the parking area, Sangram allegedly hit him with a rod thereby leaving him injured.

Sangram's friend Mahesh Prajapati, who was also present in the parking lot also hit Vadher with a stone. When Vadher's father tried to rescue his son, the duo attacked him as well. Later, the duo threatened to kill Vadher. Soon he was taken to a nearby hospital by his wife and other residents post which a case was case was filed. Ahmedabad Shocker: Man Beaten With Broom, Hurled With Casteist Abuses for Sporting a Moustache in Sanand.

The police have registered a case against Sangram and Prajapati. The police have also started recording statements of witnesses and trying t o scan the CCTV footage of the incident.

(The above story first appeared on LatestLY on Nov 28, 2022 04:27 PM IST. For more news and updates on politics, world, sports, entertainment and lifestyle, log on to our website latestly.com).