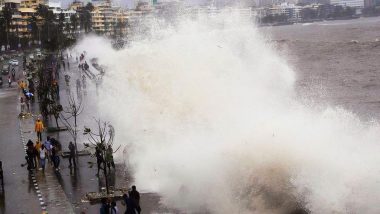 Mumbai, June 11: Mumbai will witness a high tide of 4.39 metres at 12:54 pm on Friday. Only one high tide will occur on June 11. Meanwhile, the maximum city will witness a low tide of 1.82 metres at 6:54 pm. The high tide and low tide timings are keenly observed in Mumbai during the monsoon season. The main reason for this is the location of Mumbai. The city is located at the coastal edge facing the Arabian Sea. Notably, the city will witness this month’s highest tide of 4.85 metres on June 25 and 26. Mumbai Building Collapse: One Dead as Three Houses in Chawl Collapse at Dahisar.

Monsoon 2021 arrived in Mumbai on June 9. Heavy rains are lashing Maharashtra’s capital city and adjoining areas, including Thane and Palghar, since the arrival of the monsoon. The India Meteorological Department (IMD) issued an orange alert in Mumbai and its nearby area. The weather department predicted heavy rainfall in the maximum city in the next five days. High Tide Dates in Mumbai: Here's The Calendar of High And Low Tides for June 2021 During Monsoon.

Due to heavy rains, waterlogging has been reported in many areas of Mumbai, including Mahim and Andheri East. Long traffic jams were also seen on the roads of Mumbai. As per IMD, city's Colaba received 23.4 mm rainfall while Santacruz witnessed 107.4 mm rain during the past 24 hours.

In the last two days, two separate incidents of buidling collpase were also reported in Mumbai amid incessant rains in the city. Twelve people lost their lives. Meanwhile, an orange alert has also been issued for Pune, Satara and Kolhapur districts in western Maharashtra over the next two days.

(The above story first appeared on LatestLY on Jun 11, 2021 09:14 AM IST. For more news and updates on politics, world, sports, entertainment and lifestyle, log on to our website latestly.com).