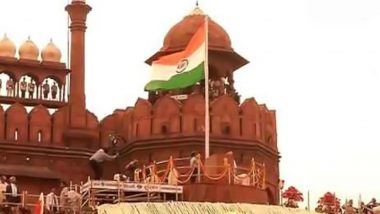 New Delhi, August 14: Prime Minister Narendra Modi will be assisted by a woman India Army officer, Major Shweta Pandey, on Saturday, August 15, in unfurling the Tricolour at the iconic Red Fort in Delhi ahead of his address to the nation on the occasion of India’s 74th Independence Day. Independence Day 2020 PM Narendra Modi's Address: When & Where to Watch Live Streaming of Prime Minister's Speech? Check Red Fort Program Schedule and List of Guests.

“Major Shweta Pandey will assist the Prime Minister in unfurling the national flag. The unfurling of the Tricolour will synchronise with the 21 Gun Salute fired by the valiant gunners of the elite 2233 Field Battery (ceremonial). The ceremonial battery will be commanded by Lieutenant Colonel Jitendra Singh Mehta and the Gun Position Officer will be Naib Subedar (AIG) Anil Chand,” the Defence Ministry statement read. PM Narendra Modi’s Independence Day Speeches’ Collection: Ahead of Indian Independence Day 2020, Here’s a Look Back at Prime Minister Modi’s Address to the Nation From Red Fort.

Major Shweta Pandey will assist PM Narendra Modi in unfurling the national flag during the 74th Independence Day celebration tomorrow. She was part of an Indian military contingent at the Victory Day Parade in Moscow in June this year: Indian Army officials pic.twitter.com/vhUZYQkIne

Major Pandey is an EME (electronics and mechanical engineers) Officer at Army's 5050 base workshop. Pandey became the first woman officer to led the tri-service parade by holding the tricolour on the Victory Day celebrations held in Moscow, Russia.

Mishra will then conduct the PM to the Saluting Base where a combined Inter-Services and Police Guards will present a general salute to the Premier. After that, PM Modi will inspect the Guard of Honour. After inspecting the Guard of Honour, the Prime Minister will proceed to unfurl the national flag.

Meanwhile, over 4,000 people have been invited to the event. Amid the COVID-19 Pandemic, the guests will maintain 'Do Gaz ki Doori' or six feet between any two guests seated during the Independence Day event.

(The above story first appeared on LatestLY on Aug 14, 2020 11:58 PM IST. For more news and updates on politics, world, sports, entertainment and lifestyle, log on to our website latestly.com).