Telangana Chief Minister K. Chandrasekhar Rao on Tuesday said that India needs to rewrite its Constitution to fulfil people's expectations and to ensure that the country progresses to its full potential. 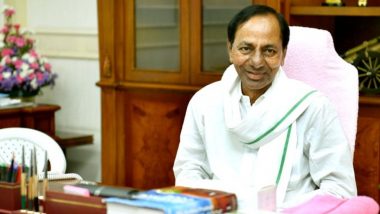 Hyderabad, Feb 1: Telangana Chief Minister K. Chandrashekar Rao on Tuesday said that India needs to rewrite its Constitution to fulfil people's expectations and to ensure that the country progresses to its full potential.

Alleging that both the Congress and the BJP have miserably failed in addressing the basic needs of people in the last 75 years, he called for a qualitative change in the country and declared that he would contribute in whatever manner possible to bring the change.

At a marathon news conference here, the Chief Minister announced that a meeting of retired IAS, IPS, and IFS officers will be held in Hyderabad soon to discuss the new agenda for the country. West Bengal Governor Jagdeep Dhankar Quotes Constitution After Mamata Banerjee Blocks Him on Twitter Over ‘Gas Chamber’ Remark.

The Telangana Rashtra Samithi (TRS) chief said he would visit Mumbai in a couple of days to meet Maharashtra Chief Minister Uddhav Thackeray to discuss his plans. He also hinted at meetings with several other leaders including his West Bengal and Odisha counterparts, Mamata Banerjee and Naveen Patnaik, respectively.

KCR, as Rao is popularly known, called for uprooting the BJP government at the Centre and "throwing it into the Bay of Bengal". "Unless it is done, this country can't progress," he said slamming the BJP for what he called spoiling the country by dividing people in the name of religion.

The TRS chief called on people, especially youth, to wake up to make their future bright.

"We need to draft a new Constitution of India. Many nations, whenever they felt the need, have rewritten their constitutions. We also need to pursue a new Constitution as 75 valuable years have gone," he said, calling for a thorough debate on the proposal.

KCR pointed out that the Constitution has given certain powers to states, certain powers to the government of India while there are some subjects in concurrent list, "but the Congress and BJP governments have stolen powers of the states". He said their policy is unitary which is not good and desirable for Indian democracy.

"In fact, as maturity level increases in a democracy, more powers should be delegated to states but the reverse is happening in the country," he said

"The Centre has miserably failed in maintaining cooperative federalism. These fellows (BJP) have doubled stealing away powers of the states," he added.

KCR termed the BJP government's call of 'one nation one registration' and the move to take over powers relating to postings of IAS and IPS officers a conspiracy against the states.

During his more than two-hour-long news conference, the TRS leader repeatedly referred to Telangana's achievements in the last seven years and projected it as a model for the entire country.

He pointed out how that country's youngest state has ensured supply of 24 hour quality power to all sectors. "When we achieved the goal of Telangana state, we promised a glittering state in two years and we achieved this. When this could happen in Telangana, why can't it happen all over India," he said.

Stating that India has all the natural and human resources to become the world's biggest economy, he said the bankruptcy in thinking of the parties and the leaders was holding India back.

Replying to a query, KCR did not agree that ensuing elections to five states are the semi-final for 2024 Lok Sabha polls. He said that the BJP may retain power in Uttar Pradesh but its tally will come down and this would be the beginning of the BJP's defeat in 2024.

"BJP may win in UP through shameless ways. It will become arrogant and commit mistakes which will be good for the country as this will be the beginning of their defeat in 2024," he said.

On the AIMIM contesting UP elections, KCR said there was nothing wrong in it. He feels that after the death of Ibrahim Suleman Sait of the Indian Union Muslim League, AIMIM leader Asaduddin Owaisi was trying to become the face of Indian Muslims.

"He has no other agenda. He is our brother, our soldier, a son of Telangana. His party has already won a few seats in Bihar and Maharashtra. Let him contest what is wrong in it."

(The above story first appeared on LatestLY on Feb 01, 2022 09:54 PM IST. For more news and updates on politics, world, sports, entertainment and lifestyle, log on to our website latestly.com).