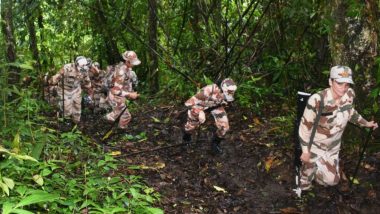 New Delhi, August 14: The Indo-Tibetan Border Police (ITBP) issued a statement on Friday, on the eve of Independence Day 2020, on the border hostilities between India and China in May-June. At some instances, the troopers of ITBP were locked in "17-20 hours" standoff against the transgressing Chinese forces. Independence Day 2020 President's Address: Ram Nath Kovind Issues Veiled Warning to China While Paying Tribute to Galwan Heroes.

"Even when the ITBP troops fought whole night, they received minimum casualties by giving a befitting reply to the stone pelters of the PLA. At places, they gave determined standoff about 17 to 20 hours throughout the intervening night," said a statement issued by the ITBP.

The border police chief, in his letter to the Defence Ministry, recommended gallantry medals for 21 ITBP personnel for the valour exhibited by them in the clash against Chinese forces in eastern Ladakh, including Galwan Valley.

"The ITBP troops not only effectively used shield to protect themselves but also responded fiercely to China's PLA (People's Liberation Army) advancing troops and brought the situation under control," the statement issued by Surjeet Singh Deswal, Director General of ITBP, added.

India had lost 20 soldiers of the Army in the physical clash that erupted in Galwan Valley with PLA troops on the intervening night of June 15-16. President Ram Nath Kovind, in his address to the nation on eve of 74th Independence Day, said if any nation resorts to the policy of expansionism against India, it would receive a befitting retaliation. "If anyone tries to create disturbance, an appropriate answer will be given," he further added.

(The above story first appeared on LatestLY on Aug 14, 2020 09:22 PM IST. For more news and updates on politics, world, sports, entertainment and lifestyle, log on to our website latestly.com).