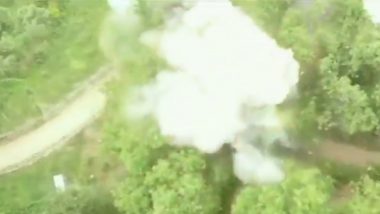 Srinagar, May 28: Indian security forces on Wednesday averted a major incident of a vehicle-borne IED blast in Jammu and Kashmir’s Pulwama district. According to Jammu and Kashmir Police, the Pakistan-based terror organisation Jaish-e-Mohammed (JeM) planned to carry out the failed attack with the help of Hizbul Mujahideen terror group. Speaking to reports, Inspector General of Police, Kashmir, Vijay Kumar said, “Jaish-e-Mohammed has the main role in this. Hizbul Mujahideen assisted them.” The terrorist operation was planned exactly like the 2019 Pulwama attack.

During the media briefing, Kumar said that the police received information that a JeM terrorist was going to carry out the operation. He added, “So we suspect that Adil (occupant of the car carrying IED) - a Hizbul Mujahideen militant is also in touch with Jaish-e-Mohammed.” The terrorists were intended to target vehicles of the security force. The J&K police IG stated, “We are calling expert teams from the outside. We suspect that the vehicle was carrying 40-45 kg of explosives.” Jammu and Kashmir: Major Incident of Vehicle-Borne IED Blast Averted by Timely Input, Action by Security Forces in Pulwama.

#WATCH Inspector General of Police, Kashmir, Vijay Kumar speaks on Pulwama car bomb attack which was averted by security forces today. He says, "Jaish-e-Mohammed has the main role in this. Hizbul Mujahideen assisted them." pic.twitter.com/eeHOqj8gjO

When the security forces spotted the suspected vehicle, they fired a few rounds. Later, the driver of the vehicle abandoned the vehicle and fled from the spot. The forces then recovered heavy explosives in a drum on the rear seat of the vehicle. The vehicle was kept under watch for the night. People in nearby houses were evacuated, and the vehicle exploded in situ by the Bomb Disposal Squad According to reports, the car had a number plate of a scooter registered somewhere in Kathua district.

(The above story first appeared on LatestLY on May 28, 2020 01:02 PM IST. For more news and updates on politics, world, sports, entertainment and lifestyle, log on to our website latestly.com).