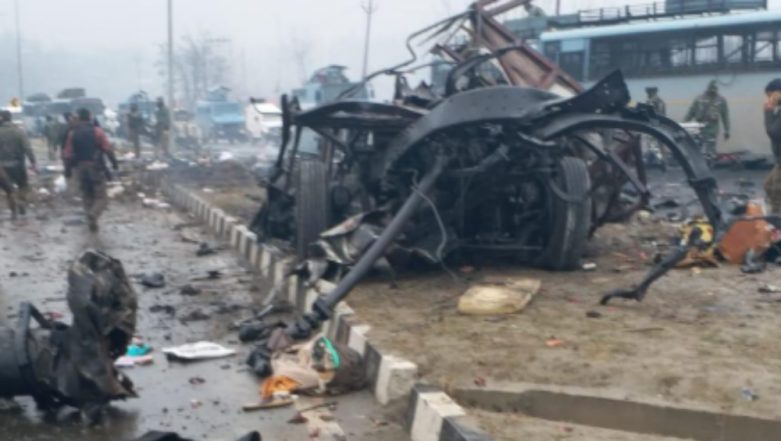 Pulwama, February 14: Twenty Six Central Reserve Police Force (CRPF) jawans were martyred, while several others injured in an IED blast which took place in Awantipora area of Jammu and Kashmir’s Pulwama district on Thursday afternoon. As per reports, the CRPF convoy of 2,500 soldiers was attacked by terrorists at Goripora area of Awantipora on Srinagar-Jammu National highway. Jaish-e-Mohammed (JeM) has claimed responsibility for the attack.

The blast took place as soon the convoy reached near a car parked on the highway. Soon after the blast, the entire area was cordoned off, and gunshots between the security forces and the terrorists can be heard. Initially, reports had claimed that 18 CRPF Jawans were injured out of which 12 were critical. All the injured jawans have been rushed to the nearby hospital. More details are still awaited. Jammu and Kashmir: Militants Attack Army Vehicle in Pulwama District.

Today's terror attack is the biggest terror attack after 2016 Uri attack. Four heavily armed militants on September 18, 2016, attacked an Indian Army brigade headquarters in Uri. A total of 17 personnel were martyred in the attack.