In the grenade explosion which took place at Jammu bus stand on Thursday, One more person succumbs to his injuries at the hospital. 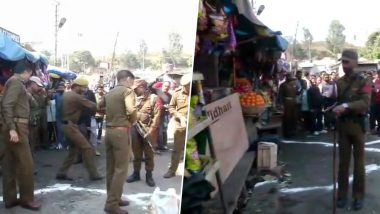 Jammu, March 8: The death toll in the Jammu bus stand grenade blast rose to two on Friday after one more person succumbed to his injuries at the hospital. The victim has been identified as Mohammad Reyaz, a Mattan Anantnag resident. Police officials have confirmed that they have arrested Yasir Javaid Bhat alias Arhaan, a resident of Kashmir valley's Kulgam district, on the charges of throwing the grenade.

According to police, the accused, tasked to carry out the explosion, belonged to terrorist outfit Hizbul Mujahideen. Earlier yesterday, a 17-year-old Uttarakhand resident Mohammad Shariq had also succumbed to injuries at the hospital in Jammu. The condition of four people, two of whom underwent surgeries, is critical.

#UPDATE Grenade attack at Jammu bus stand yesterday: One more person succumbs to his injuries at the hospital. Death toll rises to two.

The incident occurred around 12 noon on Thursday, after which police officials cordoned off the entire area. MK Sinha, Inspector General of Police (IGP) Jammu on blast at a bus stand, said, "It was a grenade explosion, it has caused injuries to approximately 18 people, all shifted to hospital."

This attack comes days after the deadly Pulwama Terror attack, on February 14, in which 40 Central Reserve Police Force (CRPF) personnel were martyred. The attack was carried out by a suicide bomber of terror outfit Jaish-e-Mohammed. To neutralise further such Jaish activities, the Indian Air Force had carried out pre-emptive air strikes on Jaish training camps across LoC in Balakot in Pakistan.

(The above story first appeared on LatestLY on Mar 08, 2019 09:12 AM IST. For more news and updates on politics, world, sports, entertainment and lifestyle, log on to our website latestly.com).