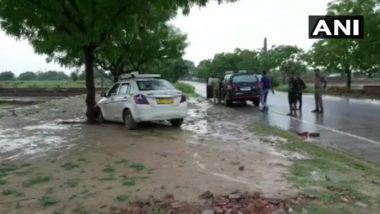 Lucknow July 9: Bahua Dubey, who was present with Vikas Dubey during the Kanpur encounter, was killed in an encounter today morning. Arms have been recovered, according to SSP Etawah Akash Tomar.  In a separate encounter today, another close aide of Vikas Dubey, Prabhat Mishra, one of the 3 men who was arrested on Wednesday was shot dead by police after he tried to escape the police custody.

A statement issued by the UP police claimed that he incurred fatal injuries on being shot while attempting to escape custody. The killing of Mishra comes a day after Babban Shukla, the closest aide of gangster Vikas Dubey - the kingpin behind the encounter with Kanpur police last week - was killed in an encounter with the police in Etawah region. Vikas Dubey's Close Aide Prabhat Mishra Shot Dead by UP Police After He 'Tried to Escape Custody'.

The Kanpur encounter is when eight policemen were killed when they attempted to arrest Vikas Dubey from Bikru village in Chaubeypur area. Since then, Dubey remains absconding. On Wednesday, Uttar Pradesh Police increased the reward on the head of history-sheeter Vikas Dubey to Rs 5 lakh. The amount was increased after police raided a hotel in Faridabad where Vikas Dubey was spotted. He, however, managed to escape before the police reached him.

(The above story first appeared on LatestLY on Jul 09, 2020 08:47 AM IST. For more news and updates on politics, world, sports, entertainment and lifestyle, log on to our website latestly.com).