A recent investigation conducted by the Income Tax department in Kanpur city of Uttar Pradesh revealed a shocking secret about local rag-pickers and paan, samosa and chat sellers. 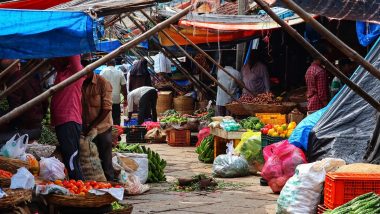 Kanpur, July 24: A recent investigation conducted by the Income Tax department in Kanpur city of Uttar Pradesh revealed a shocking secret about local rag-pickers and paan, samosa and chat sellers. The probe revealed around 256 people selling roadside snacks and eatables such as paan, samosa, and chaat in Kanpur are millionaires. They allegedly managed to make big fortune by evading income tax and GST. College Dropout Becomes Millionaire Through Innovative AirBnB Brand.

Officers from the IT department and GST registration carried out the probe in Kanpur which revealed big investments have been made by in real estate by chaat sellers of Birhana Road and Mall Road. The investigation also unearthed that owners of two paan shops in Aryanagar, one in Swaroop Nagar, and two in Birhana Road have purchased properties worth Rs 5 crore. Homeless, Beggars Should Work For the Country; Everything Can't Be Provided to Them by State, Says Bombay High Court.

Officers also found a scrap dealer in Bekonganj who has bought three properties worth more than Rs 10 crore in two years. more than 65 small grocery sellers and small-time druggists have also turned out to be millionaires Overall, 256 people selling roadside snacks and eatables have been identified as millionaires in Kanpur.

In last four years, these "small vendors" purchased properties worth Rs 375 crore in expensive areas such as such as Swaroop Nagar, Aryanagar, Hulaganj, Birhana Road, Gumti, and Pirod. They also bought around 650 bighas of agricultural land in and around the rural areas of Bithoor, Naramau, Kanpur Nagar, Mandhana, Kakwan, Bilhaur, Sarsaul, and Farukhabad.

The identified paan, samosa, grocery and chat sellers, rag-pickers and scrap dealers collected huge sum of money and invested in properties because they don't pay income tax and are not registered with GST process. All their income goes in their pocket irrespective of the fact it is taxable.

(The above story first appeared on LatestLY on Jul 24, 2021 12:32 PM IST. For more news and updates on politics, world, sports, entertainment and lifestyle, log on to our website latestly.com).