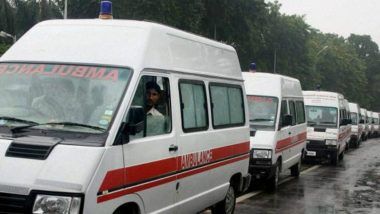 Bengaluru, July 31: An ambulance driver was thrashed by the family members of a 75-year-old COVID-19 patient who passed away on his way to the hospital in Bengaluru on Thursday. The incident happened after the patient died in the ambulance while waiting in front of the MS Ramaiah Hospital in Bengaluru.

The driver was dragged out of the ambulance and chased around by a relative. His clothes were ripped off and harangue were hurled at him. The relative was seen shouting and blaming the driver for the patient's death. Rajasthan Shocker: COVID-19 Patient in Kota Dies After Family Unplugs Ventilator to Turn On Cooler.

Speaking to ANI, the driver said that he was unable to explain the sequence of the protocol which was to be followed while getting the patient to the treatment ward.

Karnataka is one of the worst-affected states by the coronavirus pandemic. According to the Union Ministry of Health and Family Welfare, the state has 67,456 active cases as of Friday. The state government has been struggling to contain the spread of the disease as it has intermittently imposed and eased lockdown measures, especially in the capital Bengaluru.