Amid the heavy rainfall and flooding in Kerala, a landslide took place in Rajamala area of Idukki district on Friday. Due to the landslide, nine people died while 57 people still missing. Meanwhile, India Meteorological Department has issued a red alert for Idukki, Malappuram and Wayanad till August 11. 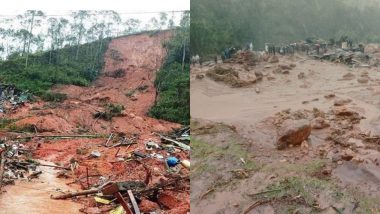 Thiruvanthapuram, August 7: Amid the heavy rainfall and flooding in Kerala, a landslide took place in Rajamala area of Idukki district on Friday. Due to the landslide, nine people died while 57 people still missing. Following the landslide, state Health Minister KK Shailaja informed that a mobile medical team and 15 ambulances have been sent to Idukki. Meanwhile, India Meteorological Department has issued a red alert for Idukki, Malappuram and Wayanad till August 11.

With heavy rains causing difficulty for the rescue operations, forest officials and other emergency services personnel have reached the spot. The landslide is said to have occurred in the Pettimudi estate which is on the way to Eravikulam National Park. In the meantime, Kerala Chief Minister Pinarayi Vijayan has contacted the Indian Air Force to provide helicopter services to Rajamala for rescue operations. Also, a 50-member team of fire and rescue officials has been sent to the landslide spot at Rajamala in Idukki district. Kerala Rains: Massive Landslide at Rajmala in Munnar, 5 Dead, 10 Rescued So Far; Kerala CMO Contacts Indian Air Force For Helicopter Service in Rescue Ops.

Informing more, Kerala Revenue Minister E Chandrasekharan said, as quoted by news agency ANI, "Around 82 people were living there in four labour camps. We are not sure many people were present there at the time of the landslide. NDRF hasn't reached the spot yet. Airlifting of marooned people is not possible right now due to bad weather."

As per the reports, around 80 tea estate workers were staying in the Rajamala area of Idukki district when tha landslide took place due to heavy rainfall. The district has been witnessing rains for the last three days and communication links have been affected in the area. The news agency has reported that over 20 houses of plantation workers have also been destroyed in the landslide.

Apart from Idduki, reports also arrived that another landslide took place en route to Sabarimala hill temple in Pathanamthitta. Though no reports of casualties were heard as of yet. Also, in Ernakulam, the famous Shiva temple on the river bank almost submerged after the water level in the Periyar river rose. Following this, the shutter of various dams have been opened by the administrations and officials have been alerted.

(The above story first appeared on LatestLY on Aug 07, 2020 01:14 PM IST. For more news and updates on politics, world, sports, entertainment and lifestyle, log on to our website latestly.com).