Cracking down, the Mumbai Police have lodged first information reports against two mosques for allegedly flouting noise pollution rules and many more are under a scanner, officials said. 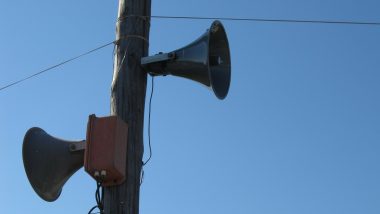 Mumbai, May 8: Cracking down, the Mumbai Police have lodged first information reports against two mosques for allegedly flouting noise pollution rules and many more are under a scanner, officials said. The Noorani Masjid, Bandra west and Muslim Kabrastan Masjid in Santacruz west will face action under the Maharashtra Police Act and Indian Penal Code Section 188, and other laws for playing loudspeakers to blare out the morning 'azan' and prayers on Saturday.

The police have also booked the Imams of the two mosques -- Anwar A. M. Shabbir Shah and Arif M Siddiqui, respectively, and the Managing Trustee of the Santacruz mosque M. Shoaib A. Sattar Shaikh -- for allegedly permitting the relay of the 'azan' before the Supreme Court's stipulated deadline of 6 a.m. Loudspeaker Row: '1500 Mosques, 1300 Temples in State Given Permission for Use of Loudspeakers', Says Maharashtra Police.

Of the estimated 1,140 mosques in Mumbai, more than 90 per cent have either removed or muted their loudspeakers to use them within the permissible 45 decibel levels, but switching off between 10 p.m.-6 a.m.

An official from the Additional Commissioner of Police said that certain other mosques are on the police scanner and all others are being closely monitored to ensure they strictly adhere to the guidelines, with one case from Kandivali being probed for reported violations.

Besides, the local police are also in regular touch with various mosques managements in their jurisdiction and counsel them to follow the SC guidelines and noise pollution laws for public good with a vast majority already complying and others in the process of compliance.

The development came a week after the Maharashtra Navnirman Sena President Raj Thackeray launched a state-wide anti-loudspeakers campaign and threatened to play Hanuman Chalisa at double volumes outside mosques which don't remove their public address systems.

However, the agitation has also affected the religious operations at other places of worship like temples, churches, gurudwaras, Buddhist Chaityas, Jain Derasars, etc., with protests from some quarters in different parts of the state.

(The above story first appeared on LatestLY on May 08, 2022 05:25 PM IST. For more news and updates on politics, world, sports, entertainment and lifestyle, log on to our website latestly.com).