NMC has changed the curriculum, the previous edition being that of 1997. The new curriculum stresses on the importance of ethics and communication competencies. This change will be a landmark reform for orienting medical education to competence based learning. 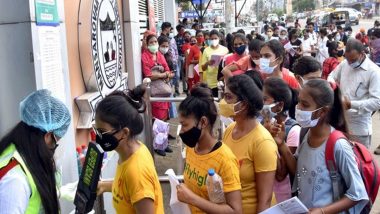 The Russia -Ukraine conflict brought to the fore many issues related to the medical education in the country. Around 90 per cent of the 18,095 Indian students stranded in Ukraine are medical students as per the central government data and Operation Ganga was successful in bringing back the majority of them.

An introspection is the need of the hour as to why Indians seek foreign medical education, despite the quality of medical education in our country being far superior to that in many countries that host Indian students.

Despite the government being successful in increasing the number of medical seats in our country, it is still the shortage of seats and expensive medical education fees that is driving our youth abroad. In Ukraine, the tuition fees were comparatively low than what was to be paid for a private management quota seat in India. Russia -Ukraine Conflict Brought to the Fore Many Issues Related to the Medical Education.

The National Medical Commission (NMC) Act of 2019 has the provision to regulate fees and all other charges in 50 per cent of the seats in private medical colleges and deemed universities.

In spite of that, the average annual fees for a medical course in private colleges is Rs 10-15 lakh. In order to complete a four and a half year course, on an average, students will have to spend Rs 60-70 lakh in private institutes.

The government has launched a Centrally Sponsored Scheme for establishment of new medical colleges by upgrading district/ referral hospitals under which 157 new medical colleges have been approved and 71 are already functional. Out of 157 sites, 40 are in aspirational districts. There is a Centrally Sponsored Scheme for upgradation of existing State Government or Central Government Medical Colleges to increase medical seats.

Another Centrally Sponsored scheme aims upgradation of Government Medical Colleges by construction of Super Specialty Blocks. A total of 75 projects have been approved and 55 have been completed. Under the Central Sector Scheme for setting up of new AIIMS, 22 AIIMS have been approved. Undergraduate courses have started in 19 AIIMS.

Centre also relaxed the norms for setting up of medical colleges in terms of requirement for faculty, staff, bed strength and other infrastructure. In order to tackle the shortage of faculty, Diplomate of National Board (DNB) qualification has been recognized for appointment as faculty members.

The age limit for appointment or extension or re-employment against posts of teachers, dean, principal or director in medical colleges have been increased to 70 years. Russia-Ukraine War: Students Who Returned From Ukraine To Get Admission in Karnataka Colleges.

In order to measure the competence of students passing MBBS, a common exit exam called NEXT was proposed under NMC, which would serve as a licentiate exam for practice and as entrance exam for admission to postgraduate courses.

The new standards set by NMC for opening of medical colleges envisages a skill laboratory in every medical institution. It provides a facility where students can practice and improve their skills in a safe environment, mitigating the limitations of learning on live patients. These skill labs will recreate the clinical environment and provide a much greater opportunity for learning through mannequins and computerised simulation.

NMC has changed the curriculum, the previous edition being that of 1997. The new curriculum stresses on the importance of ethics and communication competencies. This change will be a landmark reform for orienting medical education to competence based learning.

Prime Minister Narendra Modi had urged India’s private sector to step up to strengthen the medical education system. The government had eased the minimum requirements with respect to land while establishing medical colleges, facilitating entry of private players into medical education industry.

India has a doctor: patient (D:P) ratio of 0.74:1000, as of December 2021 and in order to achieve World Health Organization (WHO) prescribed ratio of 1:1000, the country has to ramp up its medical education infrastructure to accommodate more number of students.

In spite of it being made mandatory since 2019, to clear the NEET-UG exam to pursue medical education abroad, the number of students who applied for mandatory eligibility certificates to do foreign medical education has risen. This proves that it is not the fear of NEET that is driving our students abroad.

(The above story first appeared on LatestLY on Apr 04, 2022 06:10 PM IST. For more news and updates on politics, world, sports, entertainment and lifestyle, log on to our website latestly.com).