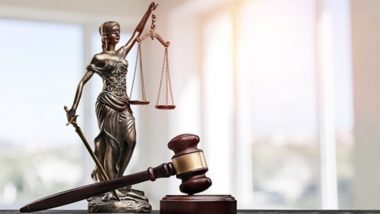 Shillong, August 25: A POCSO court in Meghalaya sentenced 25 years of imprisonment to former MLA Julius Dorphang for raping a minor girl five years ago, police official said on Wednesday. The Ri-Bhoi district Protection of Children from Sexual Offences court's Special Judge, Febroneous Silkam Sangma on Tuesday sentenced Dorphang 25-years jail for raping a 14-year-old girl in 2016 when he was a legislator of Meghalaya assembly.

The former lawmaker's counsel Kishore Chandra Gautam said they would challenge the POCSO court judgment in the Meghalaya High Court. Dorphang, elected to the Meghalaya assembly as an independent candidate in 2013 from Mawhati assembly seat in Ri-Bhoi district, is a former chairman of the banned militant outfit Hynniewtrep National Liberation Council (HNLC) and surrendered before police in 2007. New Delhi: 21-Year-Old Man Gets Life Imprisonment in Rape Case.

After he was accused of raping a 14-year-old girl, the former legislator went into hiding and he was subsequently arrested from near the inter-state bus terminus on the outskirts of Assam's main city of Guwahati. He had been lodged at the Ri-Bhoi district jail before the Meghalaya High Court granted him bail on medical grounds last year.

(The above story first appeared on LatestLY on Aug 25, 2021 05:46 PM IST. For more news and updates on politics, world, sports, entertainment and lifestyle, log on to our website latestly.com).