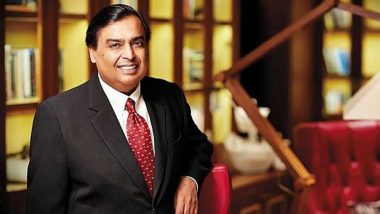 Mumbai, September 15: With Mukesh Ambani's Reliance Retail planning to sell about a 10 per cent stake to financial investors, reports arrived that Carlyle and SoftBank recently expressed their interest in investing in Reliance. However, they have been put onto a waiting list as the Indian conglomerate is already in advanced talks with other financial investors.

According to a report published in Gadgets 360, both Carlyle and SoftBank have been asked to wait by Mukesh Ambani's Reliance Retail since Reliance is in talks with Abu Dhabi's Mubadala for an investment of about $750 million (roughly Rs 5,507 crores). Mubadala had earlier invested in Reliance Jio. Reliance Industries Stock Hits Record High as Silver Lake Picks Up 1.75% Stake in Reliance Retail, RIL up 2.6%.

Recently, Silver Lake agreed to chip in $1 billion (roughly Rs 7,489 crores). Till now, Reliance Retails's $5.7 billion (roughly Rs 41,985 crores) worth of shares has been taken up. Reports also arrived that Ambani is planning to sell a roughly $20 billion (roughly Rs. 1,47,384 crores) stake in the retail business to Amazon, which is equivalent to as much as a 40 per cent holding. Bloomberg reports that if this deal is finalised, it would be the biggest in India as well as for Amazon.

(The above story first appeared on LatestLY on Sep 15, 2020 03:49 PM IST. For more news and updates on politics, world, sports, entertainment and lifestyle, log on to our website latestly.com).